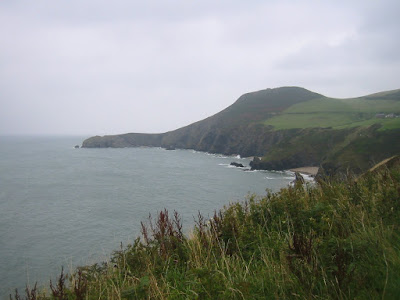 The official website of the Welsh Tourist Board, 'Visit Wales', includes the following caption on its homepage: 'Wales. Home of proper holidays. Phrasebook optional, sense of adventure essential, indifference best left at home'. Nothing wrong with that paragraph but I would also add: 'faculty of smelling indispensable, warm handshakes included in the package'. Because as I write this post those are two of the many indelible moments that have stuck in my mind.

As soon as you cross the Severn Bridge, which divides England (via South Gloucestershire) and Wales (Monmouthshire) you're hit by an all-embracing, warm - as in friendly - breeze. Roll down your car window a couple of inches and let the interior of your vehicle be invaded by the soft waft coming from the estuaries of the rivers Severn and Wye. And that's your first introduction to Cymru (that's Welsh for Wales).

Immediately after the M4 becomes your observatory and your automobile the moving camera through which you soak up the greenery the Welsh countryside so well provides. The dual language in which most road signs are written reminds you that although part of the UK, the Welsh are a proud nation and that's shown in the fact that their lingo is becoming more and more popular with youngsters now joining adults at evening classes.

The M4 changes to the A40 and eventually you come to the Pembrokeshire Coast National Park (via the A487) with its breathtaking landscapes. This is the UK's only coastal National Park as its official website proudly proclaims. A place where wildlife and people live side by side and where one minute one is looking at a sheer drop (and fretting over letting one of the little ones come anywhere near it) and the next minute one is sipping a cold drink on one of the park's sandy beaches.

Our trip ended near Cardigan, 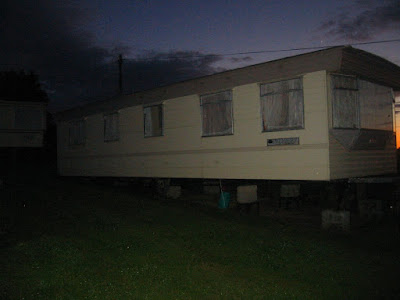 a town that was celebrating its 900th anniversary as a town around those days. Our caravan was in the middle of a farm tended by a lovely lady, her husband and her two sons. On one side we could see the sea whereas on the other one a small range of hills made the prospect of going on walks very enticing indeed.

The first two days were taken over by beach trips, especially as we were almost incommunicado (we decided to bring a portable stereo at the last minute) and were unaware of what the weather would be like the next morning. Both Tresaith and Penbryn Beach proved to be attractive spots, though the water was a tad bit too cold for my liking. Yes, you're right, I didn't get in. My children and my wife did, however, and they confirmed my suspicions: the water was freezing. But they had fun. At Tresaith a small waterfall (originating from the river Saith) cascaded over the cliffs onto the beach, thus providing a beautiful sight for those venturing beyond the sandy beach's borders. 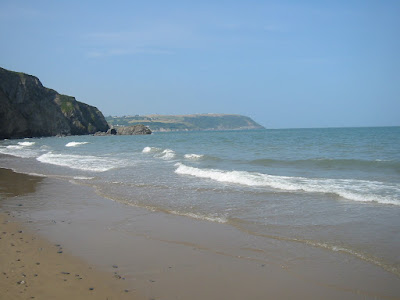 Penbryn beach, on the other hand, was longer. The kids had fun surfing (one of the neighbours in the caravan camp lent us a couple of surfboards) and playing in the stream. Although we had to walk from the car park to the beach (there's a dropping off point at the beach edge) the lush vegetation on one side of the road was a perfect and soothing companion. Later, during our stay in Wales, Penbryn beach became the starting point of one of the longest and most-enduring walks my wife and I have undertaken in our life.

One of the goals we had set for ourselves as a family before the beginning of our holiday was to try the local cuisine in Wales as often as our finances would allow us. To achieve this, we decided to dine out at least three times during our seven-day sojourn. It's a testament to the good culinary skills, hospitality and friendliness displayed by the local inn owner that we kept coming back to his establishment. Yes, meine liebe Damen und Herren, the Brynhoffnant Inn, on the A487 Aberystwyth-bound, is the place to eat if you're staying in the Cardigan area. The full address is Brynhoffnant Inn, Brynhoffnant, Llandysul SA44 6DU, telephone number 01239 654 961 and I strongly recommend you give it a try. The atmosphere is great, the food superb (the roasted lamb with mint sauce is fabulous) and the prices are reasonable. As with most things in life, it's the human factor that makes the difference and in this instance we felt very welcomed by the locals. 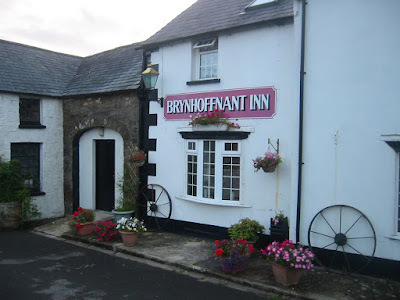 Our sightseeing experience included Cilgerran Castle, Cardigan town and Aberporth. In addition my wife and I went on a walk around Penbryn which turned out to be more than we had bargained for. 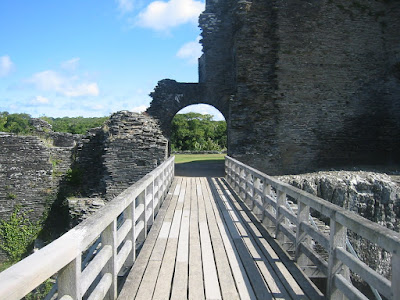 Cilgerran Castle (Castell Cilgerran in Welsh) is a stunning historical building that overlooks the river Teifi. What sets it apart from similar medieval constructions is the fact that it has two massive round towers instead of one. Over the centuries the castle, which is in excellent conditions, has been witness to the sad record of conquest and looting that has befallen the Welsh nation. A joke I read in a postcard in a local town said that when God created the world he had made Wales the most beautiful country on earth, with a friendly population and optimum living conditions. When asked by an angel if he wasn't going too far in giving away so many good things to just one country, God replied: "You just wait until you see the neighbours they're getting".

A couple of miles from Cilgerran is the Welsh Wildlife Centre with plenty of activities for families and children. 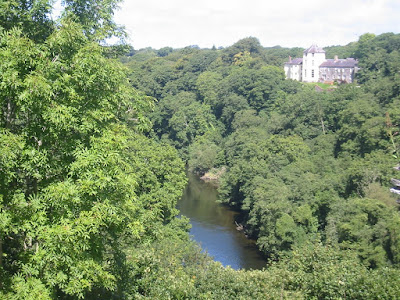 It was there that we chose to go on the badger trail, one of the many circular walks available in the area. And it was there, too, that the 'warm handshake' scenario, mentioned in the opening paragraph, took place.

We set off on a path that according to the map we carried with us would take us nicely around the Wildlife Centre and to the river Teifi. After walking for about half a mile we noticed that the trail, far from coiling itself up like a snake, continued to stretch out ahead for as long as the eye could reach. That didn't seem right but as I was leading the way, I pressed on. Maybe the sign reading 'You are now leaving the reserve' should have rung bells. But you know that comment people make sometimes about blokes choosing not to ask for directions and preferring to get utterly lost instead? Well, they might have a point. In the end, my wife did approach some fellow walkers coming in the opposite direction and they said that had we carried on on the same path we would have got to the town surrounding Cilgerran Castle. Yes, beat me over the head with that frying pan, guv. 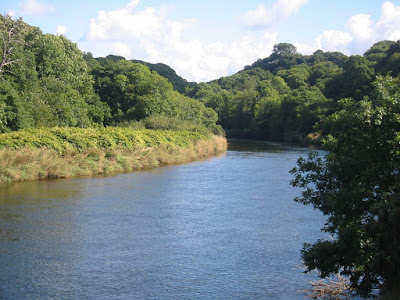 We made our way back slowly and after a while I asked an elderly gentleman I came across whether we were anywhere nearer where we were supposed to be. He smiled at me and said: "My young fellow, if you carry down this path, you will come to a little fork. Take the left path and you should be back on the road, leading to the car park. Go past the car park, past the Wildlife Centre and that's where the walk starts." And all this delivered in that lovely sing-song Welsh accent and sealed with a warm handshake. We finished our physical exercise for the day after we which we all decamped to... yes, you guessed it, the Brynhoffnant Inn.

Cardigan is a picturesque, little town with a rich mix of nature and culture. It proudly sports a stunning coastline but if you prefer a more urban environment there are stores galore that cater to different tastes. My favourite shops were off the main road, in a hidden cul-de-sac, though, the Indoor Market is worth paying a visit to. Cardigan also introduced me to the Welsh sense of humour. Graffitied on a wall I saw a caption that read: Free Wales! Unluckily for the transgressor someone had mischievously inserted a 'h' between the 'w' and the 'a', thus turning the sons and daughters of the Red Dragon into cetacean mammals. Not even William Marshal dared to go that far. 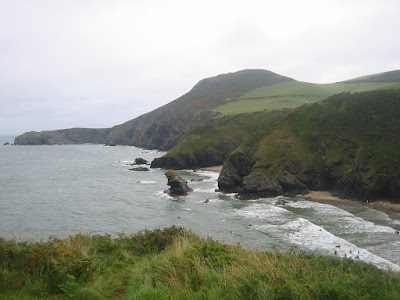 Amidst so much green, it shouldn't come as a surprise that walking was one of our favourite activities and a couple of days before returning to London my wife and I decided to go for a walk around Penbryn Beach. To say that it was exhausting would be an understatement. But, whatever we invested in sweat and energy, was recouped in views. Unspoilt coastal spots, deserted beaches and secluded coves were just some of the amazing sights to which we were treated. And in the middle of it all, the smell coming from the sea. The soft waft caressing my nostrils, my hair salsa-ing with the breeze. The incredible feeling of being free and together with nature. The grandeur of the cliff-tops, and the extensive open vistas. And in my mind two words that conjured up the Welsh experience for me: aroma and a handshake. 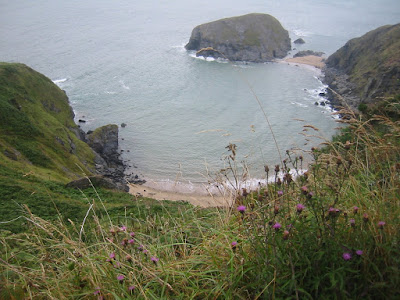 Next Post: 'Of Literature and Other Abstract Thougths', to be published on 14th September at 11:59pm (GMT)

Labels: A Cuban In London, Cubans in London, music, Nirvana, The Man Who Sold the World