Was Margaret Thatcher a punk politician? No, no, don’t all rush at once to answer the question. Let’s analyse the premise of it first, though. She rose to the top in a party not known for its pro-women agenda; she was the grocer’s daughter who rubbed shoulders with the aristocracy and the upper classes, the typical fanbase, according to some, of the Tory party. And last but not least, as The New Yorker put it so clearly recently, she spoke out about the perils of climate change before many of today’s Earth-saviours. 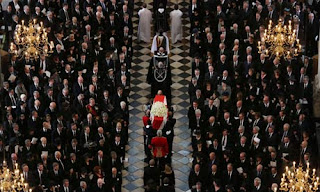 So, was Margaret Thatcher a punk politician who went against the status quo?

One of the advantages of being an immigrant is that you can afford to have a good and comfortable outsider’s view on matters that trigger off very emotional responses. The downside of it, though, is that if you are as opinionated as I am, being silent is not a reaction with which you would normally be happy.

Yes, even her death caught me outside Britain.

Early morning, Monday 8th April, I was in my hotel room in Cuba when my wife decided to switch the telly on. The night before we’d left it on the BBC World News channel and now, there it was, the caption running on a loop at the bottom of the screen: Lady Thatcher has died. I have to admit that at first I didn’t really react (react to what? To whom?). In fact, I was more concerned about dealing with a (non-existent) plug in our bathroom sink than with the demise of the Iron Lady.

Later on that day I went to the beach and ran into a British guy who was holidaying in the same hotel with his family. Did you hear, Thatcher died, I said. He looked at me, grinned, shrugged his shoulders and before I turned around, gave me the thumbs up. This is getting confusing, I remember telling myself.

I don’t think I can recall another politician in modern times who has polarised society so much. The Marmite effect could well have been invented for Margaret Thatcher. Heck, she probably created the bleeding thing and flogged it to the first investor she ran into after a cabinet meeting. What I realised in the days that followed her death was that when it came to Maggie, everybody had an opinion. She was a “stroke” politician, as in, you loved/hated her. Whenever her name was mentioned in public and more specifically in relation to her funeral (and the 10 million quid it was going to cost us), I expected television newsreaders and radio presenters to make a comment along the lines of: “delete as appropriate”.

What this evil/good duality brought about, in my humble opinion and outsider’s vantage position at the back of the theatre, was a reputation for being a major league hitter.  She was no longer “Margaret Thatcher, Milk Snatcher” of the 70s, she was now The Iron Lady, a moniker that was intended as an insult and yet, as it happened to the Impressionists in the 1800s, became a badge of honour. “Wets” in the Conservative Party. Down. Miners’ unions. Down. The Argies. Down. There was no stopping Maggie. But riding roughshod over people destroys grey areas and replaces them with black and white ones. Thatcher suddenly found herself in the same love/hate category as Stalin (there are people who still think that his gulags were a necessary step in the construction of socialism in the old Soviet Union) and Muammar Gaddafi, to name but two satraps whose role in history will always divide audiences. This is the view with which I was presented when I came to live in the UK. A north/south divide in England, where in the former the Tory party had been almost expelled (in fact, cross the border and include Scotland, too). I also found an unbridgeable rift between those who believed in big government and those who plumped for a downsizing of the state’s role in the lives of individuals.

I do hold another opinion, however. This is that whilst Thatcher was in power politics was interesting. I don’t mean this in a voyeuristic sense; after all the long unemployment queues, the demos and the battles with the police have all been well documented. I mean it in the sense that people had something to fight for. Compare the 80s (which I didn’t experience in the UK) with the noughties (which I did) and the commodity most people trade in nowadays is apathy, despite the fact that the recent government’s disability ruling will probably be the coup de grâce to the independent living fund. No, last time I checked, there were no demos planned for tomorrow.

When it comes to Thatcher and her legacy (maybe you are in the camp that benefited from her free market zealousness or perhaps you were affected by her “there is no such as society” motto) emotions run high and reason is usually pushed to one side. However, even if it comes from an outsider like yours truly, you will have to agree with me that two of the words that defined her years were “vitality” – of an economic type, say – and “imbalance”, social and economic. I am sure that even that chap on the beach would agree with that.

Labels: A Cuban In London, Billy Bragg, Cubans in London, Margaret Thatcher, music, Which Side Are You On?
Newer Posts Older Posts Home
Subscribe to: Posts (Atom)