Andu Cafe: the flavour of Ethiopia in Dalston 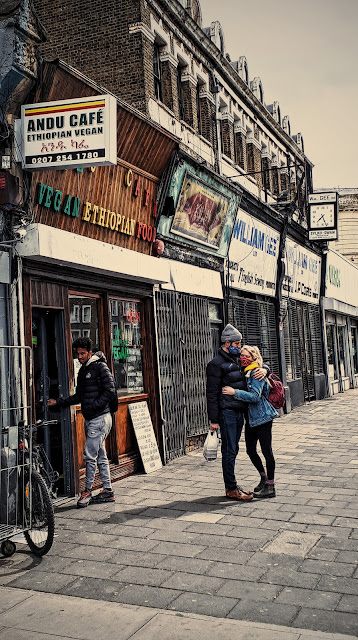 Some of us have kept the high street food economy going with occasional takeaway orders during these lockdown times.

It was my girlfriend who told me about Andu Café in Dalston, east London. This is an area well known to both of us. We’ve been to The Arcola Theatre, just down the road and to gigs at the Dalston Eastern Curve, on Dalston Lane.

However, I knew nothing about Andu, an Ethiopian vegan restaurant on Kingsland Road. Already this is another place to add to Meal on (Two) Wheels’ ever-increasing list of must-visit cafes and eateries in the Big Smoke.

Andu’s success is a combination of low-price, high-quality food, friendly service and cash-only policy. The punters outside (some of whom looked like regulars) were evidence of this.

The menu’s simplicity betrays its tastiness. There’s only the sampler platter to try. This is a six-dish mix of spicy lentil stew, greens, spiced potatoes and onion, two split peas and some vegetables. This is usually served with either rice or injera, the traditional Ethiopian bread. I would strongly recommend choosing the latter.

I’ve written in this section before about Ethiopian food. Andu’s food is as good as Mesi’s Kitchen’s, even though the latter’s menu is far more varied.

The gomen were nice and crunchy. The yesimir wot (lentil stew cooked in a Berbere sauce) was well seasoned. The lightly curried mix of cabbage, potatoes and onions (tikil gomen) was tender and well cooked.

This is street food the way it should taste: gloriously satisfying and cheap. As London prepares to open up the doors of its cafes, restaurants and pubs, Andu’s should be on everyone’s list. Whether to sit in or take away, it won’t matter, the grub will still be good.