I was recently at a concert by the Cuban pianist Roberto Fonseca at The Barbican. He was already into the third track of a superb set, one where he was showing off the skills that have marked him off as the must-watch musician from the Caribbean island in the last couple of years, when my attention was diverted to a small light flickering on and off to my right. Whilst a silence, so dead that you could've actually heard a fly let one drop, reigned in the auditorium, a punter busied himself with taking photos of the Cuban prodigy on his cameraphone. 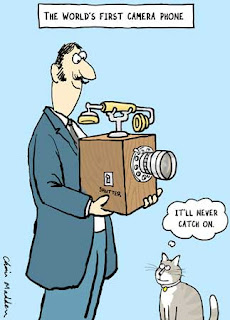 Now, mobile devices operating as descendants of Louis Daguerre's famous invention are nothing new. Their ubiquity is part of this century's landscape. But there's a time and a place for everything and I just feel that we've sacrificed our common sense to modern technology.

When that phone lit up to my right, followed by equally small flickers here and there, Fonseca was halfway through one of the stand-out numbers in his latest album, "Yo" ("Me"). Quien Soy Yo (Who am I) is a piano-driven ballad that aims to explain somehow the solipsistic title of his new record. By opting to use his phone's built-in camera instead of the natural lenses he was given when he was born, this spectator was not only ruining his experience of the show (his choice) but also mine (albeit partially; luckily, I can easily block out most unpleasant "intrusions" like that one). As it's often the case when I've been confronted with a similar situation in the past, my reaction was to question the motives behind his action.

Let me make it clear that there was no noise coming from the device. Everytime the shutter tripped, there was just silence in its wake. But that still doesn't make what happened right. The mobile phone's screen was large enough for me to take an interest in what Roberto Fonseca looked like on it. And, of course, I didn't want my eyes to turn in that direction. Furthermore, the punter's camera seemed to be the signal other members of the audience in the same mindset were waiting for and within seconds, minute bursts of light appeared in the theatre, like fires lit by cavepeople attempting to communicate with each other.

What was this person's motivation when he pulled out his Lilliputian photographic tool? Did he want to hold on to this moment for eternity? No, I don't think so. If so, why record this instant on a gadget where it's so easy to lose it? Press the wrong button afterwards and that image of a fuzzy, shaky Fonseca will end up in the same place as that beach in Cornwall, or your partner standing next to one of the lions in Trafalgar Square, or your sister making faces with a wig on, or your little nephew attempting his first cartwheel. In the virtual bin. Was his motivation then part of the modern compulsion that dictates people live their lives online 24/7? More like it. The likelihood is that both the photos and clips taken on that cameraphone ended up on You Tube, Vimeo, Facebook or any other social platform. Notwithstanding the fact that the unsteady handwork probably rendered the final product unclear and jerky, resembling more a male adolescent's spasmosdic, nocturnal excursion into Eros' country.

Time was when the only mementoes with which we walked away from a concert were a T-shirt, a cap (or beanie hat nowadays), a copy of the album by the artist we'd just seen (especially if it was, as at Fonseca's concert, a new record) and the ticket stub, which overnight became one of the most valuable keepsakes in some people's lives. But now, with the advent of cameraphones, all that is almost gone - there was still, I must admit, an orderly queue outside the auditorium at the end of the concert with people waiting for Fonseca to autograph their copy of "Yo" - and what we have instead is a collection of blurred images, bad audio and distraction to others. Which makes a flatulent fly a more welcomed pleasure.

From my beloved Cuba I bring you a little "something" that will put a spring in your step today. I'm back to normal next week. Have a great Sunday!

Some musicians play their instruments well. Others do it rather well. Then, there are those who are really, really good. But there are musicians who don't just play their instruments, but also become them. Those are the exceptional ones and the world would be a poorer place without them. Despite her young age, Ayana, London-based cellist, is already a member of this select group. Have a nice Sunday. I'm still taking a break from blogging.

One of Elton's more thoughtful songs and one whose message we would do well to heed. I hope you're having a relaxing Sunday.

We all have a little corner we call our own, it could be in our city/town, or in our mind. Don't forget to look after your corner. Enjoy your Sunday. I'm enjoying my time off from blogging.