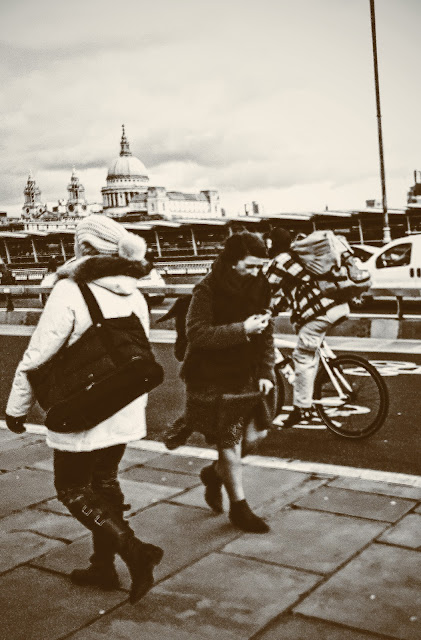 The low winter clouds leave Farringdon Road decked in grey, but if you want to find dullness here you will fail. The Deliveroo and Übereats cyclists put paid to that. The way they spread evenly on Blackfriars Bridge (both on the foot traffic side and the A201 road), hogging almost every single space available, is a sight to marvel at. That is, if, unlike me, you’re cycling yourself. Then, the view, far from enjoyable becomes bothersome.

Although busy and noisy, the bridge today is a far cry from the time when the Blackfriars Monastery was located on the riverside. It was there that the “Black Parliament” met a few years before the start of the Wars of the Roses. Today, no one carries the white rose of York, or its red counterpart from Lancaster as they cross the Thames, but we still fight over the equivalent of the English throne in the 15th century: space.

You notice it in our postures: heads bent down, taut, veiny necks shooting forwards, muscles tensed up, our bodies and bicycles poised over the bridge like human daggers. Clicks, clacks and clatter signal gear changes. A symphony of bells betray the presence of a distracted pedestrian walking into the cycle lane. In the distance, St Paul’s Cathedral stands majestically amidst the architectural Johnny-come-latelys: the Shard, the Grater and the Gherkin.

Meanwhile on Blackfriars Road, the Deliveroo and Übereats cyclists move with the grace of birds. Tilting from left to right and viceversa, they zero in on whatever little space is available, attack it, conquer it and leave it for the next one; the wind (or lack thereof) acting like a loose rudder. The effect is a “now you see them, now you don’t”. And you would marvel at their efficiency. Of course, you would. That is, if you weren’t a cyclist. In which case, you would probably carry a rose in your pocket. The colour would be up to you.