Pieces of Me, Pieces of Havana

Mid 90s, Havana. With a little help from Allen Ginsberg

dragging itself through the jineteros-filled streets at dawn, looking for an answer to the collapse of ideals

who, poverty-affected and fidelismo-struck sat up smoking in the supernatural darkness of the “wall”, minute dinghies across the water and the sound of timba in the background

who bared their – already semi-naked – bodies to José from Valencia, or François, from Quebec, staggering down poorly lit potholed roads.

who, having graduated from state-funded universities, hallucinated Paris, Madrid and Rome among wannabe western socialists scholars of marxism

who got busted by salivating coppers freshly arrived in Havana

who ate the fire offered in purgatoried hotels, expiating their sins before going to heaven, or room 1901

incomparable chevroned-lit neighbourhoods of shuddering, faltering lights, casting shadows on the sub-fauna between the 1830 restaurant and the La Punta fortress

who met a 62-year-old German woman vanishing into nowhere Zen, leaving a trail of unambiguous happiness behind, without noticing the happiness-smeared sword of Damocles following her across the ceiling

What sea-facing statues bashed open the 62-year-old woman’s skull and ate up her brains and imagination?

Sat opposite me, facing me, laughing/crying/breaking/questioning/debating/pondering/challenging/demanding

And the weil hangs, hangs from the ceiling like the same sword of Damocles that has now been taken down and driven through her heart

There is no weil you say there cannot be as long as she doesn’t understand the pain stashed away under the stairways, out of the way of punters visiting the illegal paladar

Breakup on the roof, roof overlooking the city, city forced to sleep by scheduled powercuts but awakened by epiphanies and despairs

62-year-old German woman, I’m with you on San José Street where you’re madder than me

I’m with you as you walk away, down the dark stairs, the sound of reggae music receding from your ears and increasing in mine

I’m with you as you wake up the next morning and look at yourself in the mirror, my generation reflected on your face 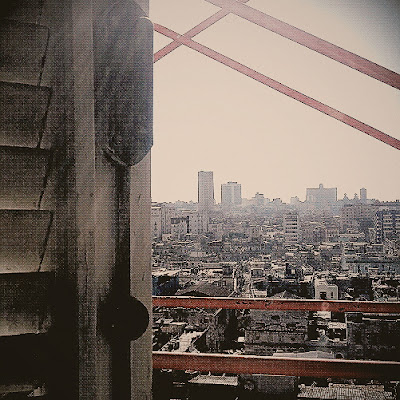