The best response to the question of what the meaning of life is, if someone ever asks you, is “look for it in a police crime reference number”. The parable of our human existence can be reduced to a letter from the local police station. Sandwiched in between the Total Policing motto at the top and the logos of both CRIMESTOPPERS and victim support at the bottom is the human essence of us. Our unsolved essence.

Dear So and So,

Thank you for contacting us to report the recent Crime. By reporting this you have helped us to understand local crime and police the area more effectively.

We have investigated the incident and our enquiries are now complete. However, at this stage, we do not have sufficient evidence to proceed further, which means we must close the case.

Why was “crime” spelled with a capital “C” in the missive? Was it to highlight the absurdity of someone making off with my bicycle? A bicycle that had been double locked in my front garden, but not actually bolted to anything? A fact that was seized upon by the less-than-helpful-and-rather-testy operator I spoke to straight after the incident? Or was the need for a big “C” a subliminal message from the forces of law and order? A way to show the public (crime victims, for instance) that the “C” stood for “cancer”, but of the social type.

Whatever the significance of that capital “C”, the effect of the letter was the same. My bicycle of almost four years, my two-wheeler, companion in so many urban jaunts, the transport that came in so handily when I went to Grenfell last year to give my support to the victims of the fire a couple of days after the disaster (most roads were blocked, so it was less difficult to pedal my way from help centre to help centre carrying donations on the rack). That bike had been taken, stolen from me in broad daylight a week before. And here I was, holding a letter from the local police telling me that “Although this case has been closed, our work does not stop here. We will continually review the information you have provided, as well as any additional evidence our officers have gathered.”

I felt as despondent and helpless as Hamlet in Act 1, Scene 2, when he delivers that powerful first soliloquy: “O that this too solid flesh would melt/Thaw, and resolve itself into a dew!/Or that the Everlasting had not fix'd/His canon 'gainst self-slaughter! O God! O God!/How weary, stale, flat, and unprofitable/Seem to me all the uses of this world”. Or to put it more succintly. How useless my local bobbies are. 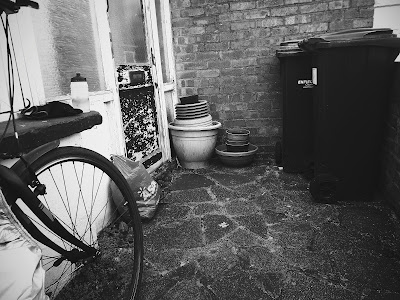