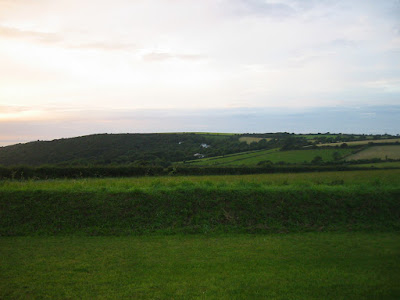 I am sitting in the back garden in my house. The grass has just been cut (by me), my daughter is out on the street playing with a group of friends, my wife is cooking a Sunday roast and my son is practicing his saxophone. On the table in front of me lay two excellent articles: 'Over the moon: Adam Phillips on the happiness myth' and 'The Nature of Beauty' by Nicolas Humphrey (the former can be read here for free, whereas the latter is subject to online subscription, although the magazine where it appears, Prospect, can be purchased at any branch of WH Smith. You can read the intro here).

Let me just get back to that mown grass. Let me soak up the smell of freshness, the scent of earthiness. It evokes childhood memories, hope, optimism... happiness. Or is it satisfaction instead of happiness?

Recently a fellow blogger gave me an award that came with a few questions attached to it. One of them asked me what made me happy. I replied then that I did not think much of happiness, that satisfaction was a much more desired goal. I still have not changed my mind about that but after reading the two aforementioned essays, my mind began to wander.

Adam Phillips thinks that "One of the ways in which happiness is made to seem like an inclusive ideal – the ways it charms us – is by our asserting that by definition the things that matter most to us must make us happy, that that is how we know they are good. It's as though one word could do the work of the moral imagination." I agree with him totally, but only insofar as conscious decision-making is involved. If I buy tickets to see the Alvin Ailey Dance Theatre Company, I know it's very likely that I will derive pleasure from the show and consequently I will feel happy. However, there is a deeper subconscious mode that is triggered off whenever we are exposed to stimuli of whose effects we might not have been aware before, for instance: my son playing the saxophone, my daughter enjoying her friends' company, my wife cooking a Sunday roast. I did not make a conscious decision about these events. They just happened.

That leads me to Humphrey's essay. He analyses beauty and its place within evolutionary theory, arguing that the more we learn about this phenomenon (beauty, that is) the less we understand it. He correctly points out that biological survival doesn't/can't explain the existence of beauty because although on the outside its effect on humans might be of a minor significance - compared with the need for food, for example -, it really does enrich people's lives and some of us would find it hard to get by without it around. By his logic, then, a lawnmower, a wind instrument and a dead Gallus domesticus being given the perma-tan treatment, combined together to give me a 'happy moment'.

Beauty, the contemplation and absorption of it, should ideally beget happiness. Or so Adam Phillips seems to think. Although he uses the word 'beauty' only once in his essay there are plenty of examples of elements that can lead to happiness and whose presence gives us intense pleasure: a stable family, non-competitive siblings, loyal friends, trusting partners, a good education, the list goes on. That's why the acquisition of this mental state is so important for us. It is also the reason why we go to great lengths to achieve it. Including making other people unhappy.

Adam writes: "bad things can make us happy – and by bad things I mean things consensually agreed to be unacceptable. It clearly makes some people happy to live in a world without Jews, or homosexuals, or immigrants, and so on." It is one of the few times where I have come across someone acknowledging openly that what we call 'evil acts' (a very misleading term in my opinion) are nothing but the result of someone chasing their own version of Heaven - religious pun not intended.

One of my longer-lasting memories from my childhood is to see footage of Hiroshima and Nagasaki, two cities where the US government carried out two atomic bombings. At the time I must have been five or six, but I recall marvelling at the shape of the mushroom cloud and how eerie and spellbinding it looked. That I was overwhelmed with shame years later when I learned about the history behind it doesn't eliminate the effect this 'beautiful' picture had on me when I was little. It only goes to show that sometimes for humans to be happy, misery has to be included in the picture. Let me go back to my opening paragraph: when I cut the lawn in my garden, I probably killed a few worms, spiders and creepy crawlies. My son playing the saxophone might have been disturbing for my neighbour and let's not even go into the whole Sunday roast malarkey. Luckily for chickens my wife insists that we buy the free range variety. Apparently they have more space in which to move and better living conditions, but we all know where they will end up: on your plate. Happiness (is a warm gun)/Bang Bang Shoot Shoot.

Although both writers are writing about different phenomena, very often their ideas overlap. For example, Nicholas avers that "beauty stirs us up, and takes us over - giving rise on occasion to the peculiar feeling of 'flow', 'melding', or 'union'." That statement rang many bells when I read Phillip's description of how the process of happiness is attained: "If liberty is there when tyranny is taken away, happiness is there when whatever makes us unhappy is removed. From a pragmatic point of view the art of a good life involves removing the obstacles to happiness; the picture, if we visualise it, is of something looked for, something looked forward to, and of there being something in the way." That 'looking for/forward' is essential to the feeling of 'flow' that Humphrey describes. It implies movement, progression, action, it means that something is going on. Without getting too anal about it, the picture I depicted at the beginning of my post united diverse elements, which, as standalone factors, might have or might have not been conducive to my 'happy moment'. But when put together they provided joy.

There are a few flaws, however, in both articles, in my view. In the case of 'The Nature of Beauty', the examples and images used are too Euro-centric. It's rather unfortunate that the author falls into the usual trap of men of a certain age, class and colour because this takes away some of the polish off his well-written essay. Rembrandt, Mozart and Camus all have cameos in a piece that could well have included some of the beautiful works of art produced in Africa, America (the continent) and Asia. In fact, if he ever reads this post, may I suggest to Nicholas that he pop by the blog Tulsi Tree, written by Jai Joshi? Jai has a regular section where she posts stories from the Mahabharat, an epic poem of ancient India. The beauty of the tale is not just in the narration, but also in its prescience. Many a time I have left comments on her thread saying that a particular passage reminded me of a current situation. Besides this white, middle-class, middle-aged, male western approach, Humphrey's four final paragraphs left me feeling disheartened and a tad bit angry. Disheartened because up to then he had made a very a good case for why beauty was an indispensable and necessary human trait despite the fact that it came lower in the hierarchy of human needs. Yet, for him this highly sensitive nature that we have developed througout our evolutionary period is merely a response to a design created by an 'artist'. My anger arose from the fact that he thinks this 'artist' is God. Without meaning to sound like a militant atheist (thanks Benny, love the new nickname), I can only say to Nicholas that my response to beauty is based on trying not to question it, just perceiving it and feeling it as it is. That 'someone' is massaging landscapes into beautiful shapes for my amusement has never entered my mind.

With Adam's piece the only flaw I could see was that he focuses too much on the notion of happiness in the US according to Thomas Jefferson's Declaration of Independence: "We hold these truths to be self-evident; that all men are created equal, that they are endowed by their Creator with certain unalienable Rights, that among these are Life, Liberty, and the pursuit of Happiness." It's not clear whether he is writing about the effect Jefferson's words have had on US citizens for centuries (which has been well covered), or if he finds fault with the original document - maybe its highly charged idealism. My take on it is that the Declaration of Independence was a shorthand (and at the time a very revolutionary attitude) for the right to pursue various goals whose outcome would bring satisfaction. Note, satisfaction, not just happiness.

Because, as I sit here in the back gaden in my house, listening to my son playing his saxophone, waiting for my wife to call us to dinner and soaking up the smell of freshly cut grass, I'm overcome by a sense of deep gratification. But I bet Mr Chicken would disagree.