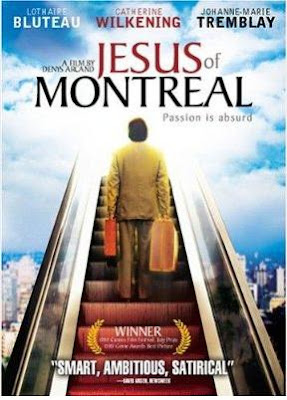 When I was younger I got involved in various drama projects. One of them was led by an independent producer and director who had gained certain notoriety in the alternative cinema scene in Havana. We used to rehearse every Sunday morning and although our work never made it to the screen - to my chagrin - I enjoyed the sessions because they were extremely liberating. A key exercise was to remember a sad episode from our childhood, act on it and come out of it as quick as possible. I was good at the recalling and reliving it but less effective at the letting go of it.

The same happened to Lothaire Bluteau's character in "Jesus of Montreal".

If with "The Decline of the American Empire", Canadian director Denys Arcand gave us a comprehensive view of Montreal's chattering classes, their inhibitions and repressions (especially of a sexual nature), with "Jesus of Montreal" he turned the seaport city into a version of Gethsemane.

A Catholic priest (Fr. Leclerc, played by Gilles Pelletier) asks an actor (Daniel, played by Lothaire Bluteau) to update a Passion play he's been staging for many years. The piece feels somewhat dated and the prelate thinks that a fresher approach will help his church gain new worshippers. Daniel's approach is, for want of a better word, unconventional. At some point he even hints that Jesus's biological father is a Roman soldier who leaves Palestine soon after. The production is very successful but it falls foul of the higher church authorities who order Fr. Leclerc to stop it. With the boundaries of art and reality becoming more and more blurred, Daniel's life starts mirroring that of his character, Jesus of Nazareth. The final scene in a Montreal underground station is harrowing, if also poetic.

'Jesus of Montreal' is the type of film that you have to watch more than once in order to understand the symbolisms in it. Having had very little religious knowledge when I first saw it, I was more impressed with the performances and photography than with the parallels between Christ's tribulations and that of the actors', especially Daniel. This time around I looked closer and the various allegorical themes were easier to read: Daniel wrecking the film equipment at a commercial when he thinks that his fellow thespian Mireille is being taken advantage of is reminiscent of the cleansing of the temple; Daniel's apperance before a judge echoes Jesus' appearance before Pontius Pilate. And then there's the ending, which, depending on your taste, can be uplifting or schmaltzy. After his death, three of Daniel's organs, including a heart and an eye, are transplanted into three other patients. The message is clear: Daniel has become Christ the Redeemer.

But beyond this cinematographic hagiography, Denys Arcand builds a credible tableau vivant where he explores human acts and emotions such as hypocrisy, intolerance and optimism. Far from being a celibate priest, Fr. Leclerc is sleeping with Constance, one of the actresses in the production. The fine, sharp line that runs between left-of-field art and its commercial cousin is straddled more than once; one of the actors that joins the ensemble makes ends meet by providing voice-overs for hardcore pornographic films. After the church authorities demand that the play be abandoned, Daniel and his troupe disobey the orders from above and attempt to perform it regardless of the consequences, which in this case are fatal for Daniel.

With the recent papal visit to the UK, the Catholic Church has come under scrutiny once more and its stand on various issues such as women, marriage, homosexuality and child sexual abuse has been debated more openly. It was a perfect (albeit unplanned, I swear), time to watch again this cinematic gem.

Labels: A Cuban In London, Cubans in London, Jesus of Montreal, movies, review