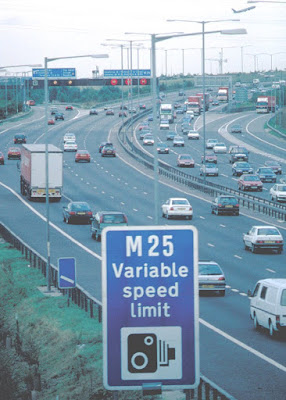 Road Song: (n) 1 A brief composition aimed mainly at being played in a vehicle on an open, usually public way for the passage of other vehicles, people and animals. 2 A melodious utterance that serves as a companion on short, medium and long trips on such a public way.
Since I passed my driving test earlier this year (fifth time lucky!) I have discovered a new passion: listening to music whilst on the road. Now, I already had a similar leaning before, but more as a passenger than as the driver as it was my spouse behind the wheeel the whole time. But since May this year, I have been on my own a lot and whilst paying attention to what is going on before my eyes on the road, my ears have been digesting all kinds of rhythms and beats.
Thus, I discovered that there are songs meant for the house and there are others designed for the car. Mix them up and you'll end up with 'Atom Heart Mother' by Pink Floyd on a long journey to Frinton. Believe me, as much as I love the British quartet, it is not the appropriate time, nor place.
'Road Songs', then, is the name of this new section. To me road songs do not relate to the actual motorway, or street, or avenue, although some fellow poster/reader/blogger might disagree with me. They have much more in common with a particular track that makes you more alert and alive whilst roaming the roads of Britain or any other country (an experience yet to live) in your four-wheel automobile. Sometimes coincidences do happen and 'Highway Star' could be one of those occasions on which Deep Purple will be playing in the car stereo at full blast whilst I will be trying to control the urge to follow Ian Gillan's advice: 'Nobody gonna take my car/I'm gonna race it to the ground/Nobody gonna beat my car/It's gonna break the speed of sound/Oooh it's a killing machine/It's got everything/Like a driving power big fat tyres and everything. But generally the type of composition I choose to accompany me in my short jaunts to pick up or drop off my children are ear-friendly tracks that stimulate the mind as well as the body. And a big disclaimer now: I do not advocate speeding on the road.
My first choice is the result of the first part of the BBC series on the history of Brazilian music. Last week saw the beginning of a journey through that South American's country rich musical legacy and one of the performers who made up this first encounter was Tom Jobim. When I was growing up in Havana I was haunted by this melody which later on I found out was sung by the incomparable Elis Regina, one of my favourite singers ever. Enjoy.
My second track is by a natural performer who has quite rightly earned her moniker Queen of Soul. She has timeless anthems under her belt so you can imagine that picking up the one is a tough job, as it were. This is a song I first heard by that other great singer Carole King and when I 'discovered' this other version I just could not believe the emotion coming out through her voice. Meine Damen und Herren:

Salsa has a social conscience, a fact that seems to escape some people sometimes. It's not just shuffling your feet back and front, 1,2,3, 'Enchufla y castígala'. This song is a testament to that. Written on the back of the assassination of Archbishop Arnulfo Romero in El Salvador in 1980, it has since become a paean to freedom and independence in Iberoamerica.

And this is all for this week. As I gear up to go on the road once more I know which songs I'll be taking with me on my journeys. How about yours?