Living in a Bilingual World (Adagio) 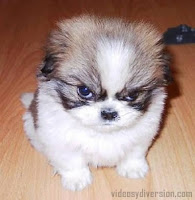 - Papi, you know what? I'm going to sing that song about the little puppy that you and I sing before I go to bed?
- The one about the Chinese dog, nena?
- Yes, and I'm going to sing it to the whole class tomorrow.
- To the whole class? Won't you have to translate it?
- Yes...
- Do you know what it's about?
- Hmmm... well..., yes, it's about a dog.
- It's more than that.
And with that La Señora Nostalgia was off. This used to be one of my favourite children's songs when I was younger and it wasn't until recently that I came across the words again via Google. So, Daughter was sat there in front of me with the piece of paper containing the lyrics in her hand, whilst I was far away, being seven or eight again, about the time when I heard this song for the first time. I did not even know then, nor do I still know whether the child in the story is a boy or a girl.
'Cuando salí de La Habana
de nadie me despedí'
Why didn't 'it' say goodbye to anyone? Who or what was 'it' running from? What terrible danger threatened 'it'? And where was 'it' travelling to?
'solo de un perrito chino
que venía tras de mí'
First mention of the Chinese dog. Daughter came up with the idea that maybe the canine sniffed despair in the child and decided to try its luck with it, or maybe they were both feeling despondent and made up their minds to leave the big city together.
'Como el perrito era chino
un señor me lo compró'
Simplicity pays off in this song. In just two lines we learn that the child, who must have been quite attached to the dog, sold it off without second thoughts. Or maybe 'it' did have second thoughts. You see, the gentleman only buys the dog because it was Chinese, so therefore he must have paid a good price as we find out later in the song, but was the child's situation so desperate that 'it' preferred to sell its friend rather than starve with it to death? Wife interjected at this point that it was a good example of how a friendship is worth more than money, to which I responded quite cynically that it wasn't proved that the dog was the child's friend, only that they were on this jaunt together. Daughter agreed with Wife and the case was closed.
'por un poco de dinero
y unas botas de charol'
So, it wasn't just money the child received for the puppy, but also a pair of shiny boots. And now we can jump to the conclusion that the child had no shoes to wear either, presumably. When I was little my imagination would run wild picturing the look of surprise on the dog's face as the man took it away and the child rushed off. It probably felt betrayed by the minor. Now I am convinced that the child had a long way to go and could not make the whole journey barefoot. But still, selling your friend out?
'Las botas se me rompieron
el dinero se acabó
ay perrito de mi vida
ay perrito de mi amor'
The child's boots broke and the money ran out. Wife was right. The dog was the child's friend and the youngster's lament at the end of the song for its loyal canine friend proves that friendship last longer than money does.
A valuable lesson for Daughter.
Copyright 2007
Posted by A Cuban In London at 12:52