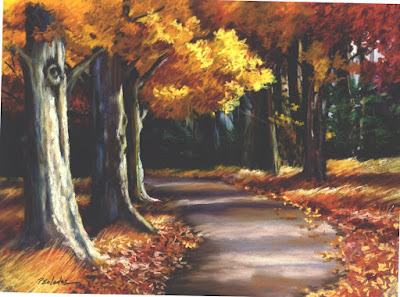 And so this is the end... for the Autumn Songs. As the fallen leaves on the ground wait to hibernate under the white carpet that will (hopefully) cover this city in the weeks to come, this little section changes season too.
I want to start with a singer whom I discovered via Radio Paradise, an internet broadcaster that has become my main source to discover new music, even when it's a few decades old (as I write this they're playing Big Mama Thornton's version of 'Hound Dog', made popular by both Elvis Presley and John Lennon). This singer's name is Gabriel Rios and the funky sound of this track reminded me of treading on crunchy leaves as I walk to work every day. As I usually have my CD player on, I can only imagine that any passer-by strolling in my direction will be bound to run for cover thinking that the Fifth Horseman of the Apocalypse is coming to take them with him. It's a nice, slow to mid-tempo number that defies this rainy weather and puts a little smile on my face everytime I hear it. And yes, you bet I'll be getting the record soon.

Second track of this valedictory post comes courtesy of that Cuban jewel called 'Camerata Romeu'. Now, I have very vivid memories of this ensemble. The first time I saw them was in Old Havana, at the San Francisco de Asis Convent, a marvellous place near Havana Bay and where on Saturday evenings classical concerts were given. I even remember that the programme included Mozart's pieces for cello, violin and piano, Cuban composers such as Lecuona and a whole plethora of contemporary musicians like Lennon and McCartney. The piece I bring you today has been covered by just about everyone who's everyone in my neck of the woods, from 'La Negra de America', Mercedes Sosa to Paquito D' Rivera. Enjoy.
Call me schmaltzy, kitsch or whatever you can think of but when I was younger I was into Roberto Carlos. That was years before I became hooked on rock'n'roll, jazz, salsa and 'Trova'. Pre-teenage years I used to memorise the Brazilian singer's songs in order to perform them in front of my family and friends. Yes, I did possess a good voice then, which has since forsaken me. When I came across this clip on youtube.com (where else but?) a little lump appeared in my throat and for just one instant I wish I could have been next to my cousin as she was the one who introduced me to the Southamerican crooner. This will bring a tear to the eyes of those Latin people who grew up in the 70s and 80s listening to singers like Julio Iglesias, Manzanero and Lupita D'Alesio and whose childhood will be irremediably linked to this forgotten era. And I mean that with pride.
And to sign off I've got a singer whom I heard the first time around via a CD I borrowed from my local library. It goes to show the little treasures you're bound to find in your local library if you look in the right places. The CD was called 'Women in Jazz' and her song stood out from the word go. It was named 'Marriage Suite' and it felt exactly like that, a passionate homage to the one you love and are about to marry, a celebration of that love. I bought her record shortly after and was glad that Aziza Mustafa Zadeh's music did not disappoint me at all. On the contrary, it went beyond my expectations and restored my faith in music. This is the title track of that CD and I hope you enjoy it, too.
Thanks for your kind comments and feedback.
Copyright 2007
Posted by A Cuban In London at 12:52