Excuse me, please, hey, you, the 488-year-old lady sitting at the front, please! Yes, you! Would you be so kind so as to come on stage, please? There, let me give you a hand, I know, I know, it's the years, isn't it? Please, this way, yes, centre stage, that's it. Now, let me shine a light on you. Yes, a light, you heard me right. You deserve that light, you deserve to be centre stage. You deserve so much more.

You see, you and I have travelled together. But me being the much younger sibling, I've learnt more than I thought by being together with you, you and I, entwined at the hip for 26 years. And now I would like you to relate to me, to us, to this audience, your experience in this almost 500-year jaunt. 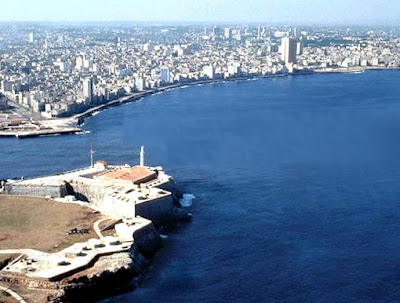 I would like you to narrate to us how you felt about the move from Cuba's southwest coast up to the west of your now renowned bay, the one our Mother Goddess, Yemaya, bathes in all its glory. Was it the mosquitoes that did not let you sleep? Or was it the swamps? I would like to know who planted the first ceiba tree around which it became a tradition to walk three times on your birthday's eve.

And you don't mind me writing to you in English, do you? After all this language is not alien to you. You withstood the siege by the British in 1762 fiercely and heroically, only to be betrayed by the Spaniards at the eleventh hour. We even got a song out of the conflict dedicated to the Guanabacoa Mayor, Don José Antonio Gómez, otherwise known as Pepe Antonio, the only one who challenged the European invaders with poorly armed troops and no military support from the incumbent Spanish government. Under the rule of the Brits you prospered economically, albeit on the back of thousands, if not hundreds of thousands of Africans brought to our country under the most appalling and inhumane conditions ever. And yet, where would we be without their influence? Where would we be without their rhythms, dances and languages? As our National Poet, Nicolás Guillén said: 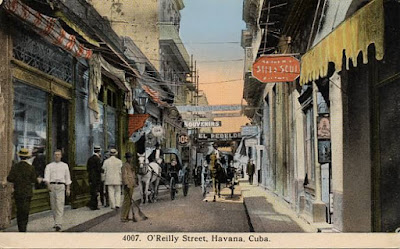 In recent years I've heard people, who've visited you, complain about the noise, the dust and the collapsing buildings. Sometimes, though, and call me a hopelessly romantic fool, we need the scratching sound of an old record to appreciate its value. Your imperfections make you human. You remind me of that line in Dulce María Loynaz' poem 'Ultimos Días de una Casa' where the author states:

You, my dear old Havana, are like that. I cannot articulate your cracks, potholes and fissures. They have a language of their own. It's the language of unshaven quality. It's what makes the migrant long for your touch, it's what makes the current denizen create anthems that will be sung by future generations across the world whereever your progeny has been dispersed to.

Because, my beautiful dame, you have witnessed the exodus of some of your more doting sons and daughters. Never has a song sounded more truthfully than when it claims that 'if my eyes ever deserted you/if life banished me to another place on this Earth/I swear to you that I'll die of love and angst wanting to walk your streets, your parks and places.'

Personally, you gave me so much. You gave me a sense of safety and comfort when I was still a teeny weenie child roaming your streets, playing baseball or hide and seek, or 'it', or knocking on doors and running away. You gave me 'Playita 16', the most imperfect and dysfunctional beach there can ever be, and yet, so inviting. You gave me parties in faraway places to which I went behind my mother's back. Luyanó, Santiago de las Vegas, Santos Suárez, Santa Amalia, Siboney, names that are forever enmeshed with my own flesh. One day I will have the same creases and crumples on my face as you have now. Let's hope I can bear them the same way you do yours.

You went from being the 'Key to the Gulf' to being 'one of the dirtiest cities in the Americas'. Why? We're the only ones to blame. We could not look after you. We let you down. We're like the teenagers who leave home only to return after a few years and litter it carelessly. You have not been protected.

But still, you persevere. I walked down your streets earlier this year, now with my wife and kids. And you welcomed them, too. We saw some of the blemishes, though. Those 'Night Flowers', sung to by our very own Silvio Rodríguez, still populate your famous roads, Fifth Avenue, 23rd Street, Malecón.

Ah, Malecón! Has there ever been a wall so loved? Emperor Hadrian would be jealous. The Chinese don't know what to do with theirs and the Germans got rid of their own partition. And you're still there, my little old friend, where so many revellers wind up, where dreams are splashed by sea water mixed with the oil from the ships entering the bay. So many songs we sang on your cold surface, so many nights on which we sat by your littoral and warmed your stones, so many early mornings that found us hoarse and voiceless, but satisfied and optimistic.

Happy Birthday my Grand Dame! I hope someday to walk three times around your big ceiba tree again, maybe this time with my wife and our very own offspring. I hope to be part of your Latin American Film Festival again, wander up and down 23rd Avenue, going from the Yara cinema to the Chaplin, and from there to the Riviera, before ending up at La Rampa, in the knowledge that my intellect has been challenged and that you contributed to its enrichment.

Above all, I hope that you're still there, confident, beautiful and welcoming.

From your doting Habanero Son.