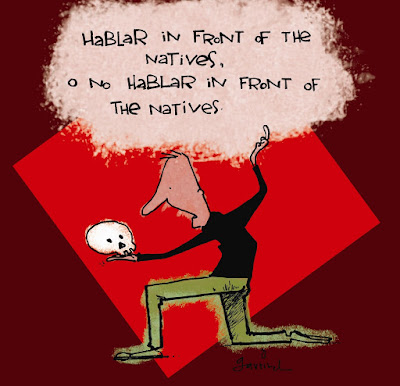 - Hi (with Spanish accent).
- Hola (Son).
- What's your name? (still a strong Spanish accent)
- Me llamo... (still Son)
- How old are you? (I gather she's from Madrid)
At that point, Son gave up. He told the lady his age in English. This is one of my pet hates and I confess that I lose my patience very quickly when a situation like this arises. Spanish-speaking people who default to English when confronted by a child speaking to them in their mother tongue. The issue becomes even more exasparating for me when the person in question has fluency problems in their adopted language and rather than using words that come to them naturally in the lingo they were brought up with, prefer to switch to a tongue full of sounds they are not equipped to pronounce even to a basic level.
But that's not the end. Cue the lady's child. I told Son to go and try his luck with her offspring instead and see if his linguistic thirst could be quenched with the younger kid. Well, I guess you know the answer to that one. The Spanish lady's boy (she turned out to be from Madrid, you see, I told you!) could not utter a word in her Mum's tongue, let alone communicate with Son. Is that the sound of an ol' chip climbing up my shoulder? You bet. When I quizzed this woman on her boy's lack of basic linguistic skills to get by in the country of her birth, her answer could not be more obtuse: 'We rarely go to Spain and we live in England now, anyway, he never wanted to learn the language in the first place and his dad is British.'
Can you hear that noise? That was my jaw hitting the floor. Since when have babies decided which language to speak? 'OK, Mum and Dad, I know that I'm only three months old, but I don't fancy the dialect that the natives of Albion speak, can I go for French instead, please?
Any language, whether it be Sanskrit, Gujurat or Portuguese is nurtured through a mix of games, communication and active participation. Maybe my ire is based on the centuries of exploitation, pillaging and looting that my continent has suffered and therefore the fact that language is one of the elements that define who we are as a Diaspora makes me defensive/aggressive against those whom I perceive to be selling out. I know parents from Mexico, Spain and Columbia just to name but three nations well represented in GB, who speak to their children in broken English, struggling to string two sentences together and their offspring, born in the UK and fluent, of course, in their mother tongue unfortunately find themselves at the losing end of this supposedly cultural exchange.
Maybe, too, I'm being unfair to some of these parents. It's daunting to open your mouth and utter a word in a foreign language in some public places here in the UK, especially in the present climate of fear and mistrust of immigrants. Sometimes the drive to be understood overwrites the need to present your child with the marvellous gift of a different culture and a different language. But, please, don't turn your back on our beautiful Spanish.
When we were leaving the park, Son looked up at me and asked me:
- Why was that lady speaking to me in English if she's Spanish, papi? Could she not understand me?
I hugged Son very hard and told him: 'No, nene, she's just confused.'
Copyright 2007
Illustration courtesy of Garrincha.
Posted by A Cuban In London at 12:17