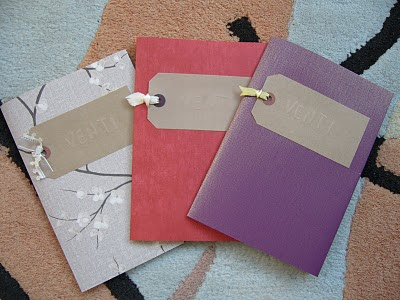 Autumn is my favourite season of the year. Regular readers of this blog will probably know that. After all I am an autumn sign (November) so there's always been a special attraction to that period between late September and early December when brown, yellow and auburn leaves give Max Brick and Tom Daley a good run for their money at synchronised dive. It is, at least for me, a time for presents. Of the birthday type, but also of the visual kind.

Yet, the best gift - or prize, rather - I have received so far this autumn came completely out of the blue. And although I'm not planning to tell the whole story, the award involved goats, Scottish sheep and even a bookmark made of sheeppoopaper (as the caption reads).

A few weeks ago, the poet JoAnne McKay, who writes the blog "Titus the Dog", ran a competition in her cyberspace. Readers had to pick the winner of the Thornhill Arts Painting Contest 2010. I rarely say no to a challenge, so I joined in the fun and left my comment. To my surprise I won and that's how a beautifully hand-made book (copy number 54) containing McKay's second collection of poems turned up on my doorstep one morning, said hello and without waiting for a reply, jumped up into my arms, asking to be cuddled and cared.

"Venti" is a book to be read in autumn. Its sixteen poems carry the chill of early mornings and the long shadows of premature evenings. Its verses arrive with a sign that read "Enjoy with a mug of hot chocolate whilst wearing a woolly jumper and socks."

I was pleasantly surprised to see the multitude of subjects JoAnne covers, from seahorses ("Hippocampus hippocampus") to parenthood ("Shadowchild"). Being familiar with her blog, which I visit regularly, I have been exposed to her poetry very often and I find it to be an interesting mix of tenderness, observation and humour. The evidence is everywhere in the book. "The Magdalene Fleur-de-Lis" is a sweet little opener ("Call me Iris. Call me Lily. Your flower/I'll keep the boys' chins up in wartime/French letters and kisses a lover's mime/that only costs them three francs for an hour/It's memory of me that lends them power/yellow flag on an azure bed through time"). Facetiousness is a common thread that unites many poems even if they don't look like comic pieces at first sight. I especially liked the ending in "Octopodes": "Your death always follows your creation/If threatened you squirt ink/Pedantic, romantic, octopodes/I think I know you".

I can't write about "Venti" without mentioning the four accompanying images by artist Matt Kish's. They fitted so well around McKay's poetry that it's almost impossible for me now to read "For Ishmael and Elijah and Those Who See" without visualising the black and white whale next to it.

I will sign off this review tonight with a poem whose title I mentioned before and which shakes me to the core everytime I read it. A few weeks ago I blogged about simplicity and how some writers manage to convey the deepest of messages with the least amount of words. This is one of those examples. Thanks JoAnne for my prize.

Shadowchild swings across the moon,
bumps my heart and is past.
Fierce cord once, the thread thins
and I must sing the pain of children:
you cut to see them grow.