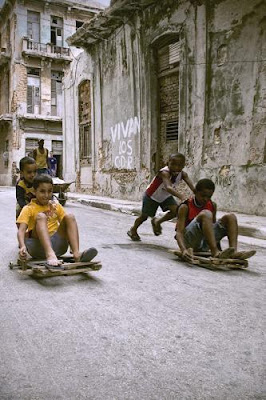 When did some of us, parents, stop having fun and start freaking out? Was there a time, place, date, when we said: "Enough's enough, baby is not baby anymore, he/she is growing up, I'd better apply to Parental Anxiety School before admission is closed"?

I was recently at the pictures with my wife, our daughter and our son. He actually went on his own, having stayed the previous night at his mate's. There he was, a pre-teen, slowly waltzing his way into thirteen, surrounded by four or five kids his own age without a care in the world. And yet I felt anxious. He's not wearing his jumper, I thought. My wife told me to chill out, don't spoil it, please. I muttered something to myself, something to do with colds, with his asthma, with looking after himself, but deep down I knew I wasn't right.

There's a big difference in how my wife and I approach our children's upbringing. I am, or rather, have become more overbearing. She is more laissez-faire. I tend to shout too much, get all worked up and think of harsh punishments when things don't go according to plan. She, on the other hand, tries to reason out with our kids, getting them to analyse what they've done wrong and how they can make amends (although occasionally she also loses her rag). Eventually I have come to adopting her method, but it's still a steep climb for me. I have an inkling as to why it's such a struggle, but based on my own background it shouldn't be so. I was given free rein when I was a child, with a lot of strings attached, mind, but I had more freedom than my sister-cousin who was six years my senior and living in the same flat. When I look at a photo like the one that adorns my post today (taken from Concurso 2009 Magazine Digital) I'm usually transported to a very contented existence when play was my eternal companion. Following this logic I should be as relaxed a parent as my spouse is. But no, I'm not.

There are a couple of factors as to why: one is migration and the other one is environment. The former can better be explained through the process an immigrant undergoes when he or she settles in a different culture and his/her existence is only made up of the present and future they chisel out in that nation. No past (except the one lived through conversations with other people, or exposure to art and/or the media) sometimes means that an uneasy feeling of not knowing creeps in. This is quickly followed by a certain paranoia when children arrive. It's that famous parental sixth sense. We smell danger everywhere, even when there's none. The second element is intricately linked to the first one since my surroundings are far from the tourist-friendly perspective people have of London. I live in a rough area with a high percentage of crime and unemployment. And although I love my barrio, I'm pragmatic enough to realise that when my children start going out on their own, I will be watching the clock anxiously and counting the minutes and seconds as I wait for them to come back home after a night on the town.

I would then like to believe that I would have been more lenient and relaxed about my children playing outside, for instance, had they been born in Cuba. I would like to think that just like I did when I was a kid, they would have been hanging out with their friends from dawn till dusk (after doing their homework, of course). The truth, however, is that I don't know whether I actually believe that scenario myself. Because being a parent is tough. There are never any easy answers to the dilemmas you encounter when raising a child.

Take a recent predicament. My brother-in-law was in town with his daughter. Both my children wanted to see their cousin and uncle, of course. But neither my wife nor I could drive them to their Nana's (where my wife's brother was staying). My other half suggested that we let our nine-year-old daughter go with her brother on the bus. On their own. That paranoia I mentioned earlier made an unwelcome appearance all of a sudden and I remember standing in our bedroom in a cold sweat. Our darling daughter? On a bus? Alone? No, not alone, my wife corrected me, with her brother, who, by the way, had just travelled on the Underground by himself a few days before. I forget now how many times I said no, only to give up at the last minute and admit (reluctantly) that at some point, one day, she would have to take a bus on her own. And if not now, when there would be an adult waiting for her at the other end, then when?

I'm aware that my worries are shared by almost every other parent out there. A cursory glance through Mumsnet, the UK's online meeting point not just for mums but also for anyone interested in parenting, is awash with examples of mothers and fathers' concerns. What I've also found out is that my anxiety might be rooted in a different phenomenon: the disappearance of the last vestige of childhood in me. This is a situation, which, if real, is very mortifying. After all, I've always believed that I still have a bit of that inner child, so necessary in austere times. For instance, sometimes I think I haven't yet lost the ability to observe the world as if I had a pair of new eyes. Curiosity still gets the better of me, without the fear of losing six extra lives (which I haven't got, anyway) or being confused with a small domesticated carnivore purring its way around Londontown. But I've come to realise that by restricting my children's freedom I'm neither putting myself in their position, nor in the position of a younger self many years ago.

Lou Reed sings humourously in "Beginning of a Great Adventure" the following lines: "I'd keep the tyke away from school and tutor him myself/keep him from the poison of the crowd/But then again pristine isolation might not be the best idea/it's not good trying to immortalize yourself". You're right, Lou, it ain't right, mate, to create a second you. That's why I prefer Joan Manuel Serrat's approach: "Nada ni nadie puede impedir que sufran/que las agujas avancen en el reloj/que decidan por ellos, que se equivoquen/que crezcan y que un día/nos digan adiós" ("No one or nothing can stop children from suffering/or the clock's hands from moving on/or kids from making their own decisions and mistakes/or from growing up and one day/ bidding us goodbye"). Still, though, I have kept my application form to the Parental Anxiety School fairly close, just in case. Or even better, under Michael Gove's new guidelines for "free schools" I might even create one such establishment myself. Care to join me, fellow parent?