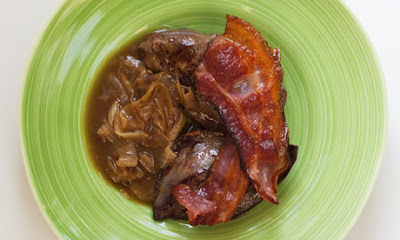 By the time you read this post I will have probably licked my plate clean. Oh, yes, I belong to the don't-leave-anything-on-your-plate-don't-waste-any-food brigade. Especially when presented with yet another succulent Nigel Slater's recipe. I also admit that I had never made gravy before so I was looking forward to adding another plus to my burgeoning cook's CV. When it comes to sauces, though, I fall on the thick side of the argument. Give me a gravy with curves, full of bulkiness and compactness any time.

Liver and Bacon (the words for the recipe are Nigel's)

For the gravy: slowly cook 2 large onions, peeled and thickly sliced, in 50g butter until pale gold, soft and sweet. Add a level tbsp of flour. Brown lightly then stir in 300ml of stock. Simmer for 20 minutes then serve with the liver. Fry or grill the liver and bacon, allowing 150g liver per person and 2 rashers of bacon. Some mashed potato would be good here.

Cook the onions very slowly and the liver very fast. The usual cooking time suggested for fried onions is often underestimated. They take a good 15-20 minutes to cook evenly. Hurrying the procedure will forfeit sweetness. Grill the liver for a minute or two. The pan must be searingly hot so the inside stays pink while the outer crust forms.

This is food for the soul and I'm a soul man. It should follow then that my first musical offering tonight is Sam and Dave's timeless anthem, "Soul Man". Tuck in!

From 60s US soul to proper, heartfelt, Spanish flamenco-pop. Malagueño﻿ Toni Zenet is a recent discovery, courtesy of a fellow Spanish blogger, but I already have a couple of his albums on my amazon to-buy list. This tune translates as "Dreaming of You" and it's as autumnal as liver and bacon. Enjoy.

And last, but not least, here's one of those songs that makes you want to stay in as soon as the streetlights are switched on and the nights draw in. Céu has one of those voices that you are unlikely to find in a post-Crimbo, January sale. This woman's vocals can only be purchased at a unique shop called 'Soul'. Heart-warming as thick onion gravy.

Next Post: 'Sunday Mornings: Coffee, Reflections and Music', to be published on Sunday 31st October at 10am (GMT)
Posted by A Cuban In London at 23:59