Last summer on our way to Wales, my family and I spent one night in Bristol. 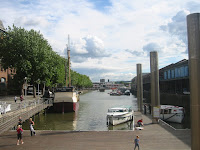 Having never been to this port city, I found its history and heritage interesting but the highlight of my visit was an exhibition by the artist Kerry Tribe at the Arnolfini gallery. The name was "Dead Star Light" and it comprised film, video and installation works exploring our relationship with memory, subjectivity and doubt. My favourite piece was "Here & Elsewhere" (clip below), which featured an interview between the British film critic Peter Wollen and his ten-year-old daughter, Audrey. Their conversation was accompanied by an on-screen vertical seam created by two synchronised images shown side by side. Eventually both the visuals and the girl's answers merge in an organic way that suggests fluidity and continuum.

Kerry's project was based on a similar work by Jean-Luc Goddard and Anne-Marie Miéville entitled "FRANCE / TOUR / DETOUR / DEUX / ENFANTS" which dates from as far back as 1978.

The first element that caught my attention when I saw "Here & Elsewhere" was the certainty and assurance with which Audrey answers Peter's questions, even if a couple of seconds later she casts doubts over her own responses. Her views on existence in relation to her physical body are very interesting in that she acknowledges that there's an on-going transformation in a person's anatomy, i.e., hers; yet, there's a core that remains unalterable. I thought that maybe in the intervening ten years (and that's probably the case now, as the video was shot in 2002, so Audrey must be eighteeen years old now) she changed her mind and began to see the core as malleable as the surface.

One of the more intriguing sections in the video was the one on remembering. Do the events, objects or persons we remember come forward to our memory? Or does our memory go out to hunt for them? And do we remember things from a past we haven't lived only through references (for instance, for Audrey is the 1970s, for me could be the 19th century) or does that past come to us through past experience of which we have no recollection?

Many of Audrey's responses brought back memories of a sci-fi novel I read many years ago, when I still used to enjoy that genre. The book was called "Fábulas de Una Abuela Extraterrestre" ("Fables of an Extraterrestrial Grandmother") and it was written by the Cuban author Daína Chaviano, who was also an English translator, interpreter and linguist. Although the novel was for children, some of the ideas crossed over into the adult world and one of them had me scratching my head for many years after I read it. It involved the Euclidean theory and how children over the age of five or six could not think of shapes other than as squares, triangles, circles and so on. The reason? School. But what happens before? In what shape does a child of two or three years old see the world in his/her dreams? I won't even mention language because there's a close relationship between language and Euclidean geometry. You name each axiom according to the assumptions you intuit from them. Let me pose a challenge to you, reader. Look around your room. Can you think of the shapes around you in any way other than square, rectangular or triangular? Try. See if you can come up with a new word for round. For instance, brgewd. Now, go out and tell the first person you come across that the full moon you saw last night was brgewd. Please, don't forget to send me postcards from the asylum. Especially if they give you a room with a good view.

Kerry's notions of movement in relation to space and time (5:37 in the clip) were challenging and difficult to explain. Are we moving when we're sitting still? I think we are. In that case, why ask a child and expect him/her to sit quietly when his body hasn't stopped moving? And I'm not referring to the gentle rocking that, especially, younger children are prone to doing when required to remain still. Are we perhaps confusing inactivity with silence? In those seven seconds it takes her to reply to her father's question, Audrey has moved in time and space quietly and smoothly.

My conclusion when I finished watching the video (and please, if you have children yourself, watch the clip below with them without any prompting and ask them what they think and above all, feel about it) was that Kerry's experiment on image, memory and the duet time/space was an invaluable tool to dig into that very often confusing but fantastic territory which sometimes can be off-limits (consciously or unconsciously) to some of us, adults: children's thoughts and imagination. What I would love to know is what your answers to Peter Wollen's questions would be. After all, occasionally our lives might resemble an on-screen vertical seam with two synchronised images shown side by side. You and the other you.

Next Post: "Of Literature and Other Abstract Thoughts", to be published on Tuesday 26th October at 11:59pm (GMT)