Recently one of the teachers in my school was telling one her students off for something he'd done, but instead of giving the pupil a tongue-lashing she tried to get the young'un to understand how his behaviour was at odds with the school ethos. At the same time she attempted to explain to him - with mixed success - what was expected of him in and outside the classroom. Some of the words she used were: manners, tact and communication. One of the reasons why I eavesdropped on her conversation with the student was because, although I'm not part of the class-based staff, I do interact with pupils on a regular basis. I was very impressed with the way she dealt with the situation and by the end I was convinced that the student would have second thoughts before lashing out again.

As someone who grew up at a time when it was still OK to give a pupil a clip round his ear, this new, alternative approach still catches me by surprise. I've probably learnt more about the art of good teaching (including how to address disruptive behaviour) in my two and a half years as a community manager at the school I'm based than I did in my five years at uni and my two years as a language teacher after. At the centre of this process is a philosophical and pedagogical personal U-turn that I think was long overdue. Harsh punishment seldom works in the long term, whereas nurturing civility in children does. 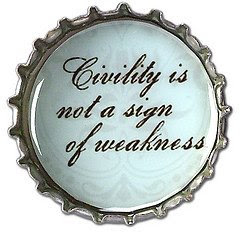 I don't know if you've ever been in the company of someone whose views sit at odds with yours. Someone whose opinions on issues that are dear to you border on the extreme. Maybe you and your companion are at a dinner party, the two of you enjoying the hospitality of a mutual friend. What to do? You can retire to another part of the house, or you can challenge this person's point of view politely. How about if you work closely with someone who represents almost everything you hate? Do you try to reach for a compromise, or do you reject the person flat-out, thus risking the team's stability?

Whatever course of action you decide to take, I'm sure that civility and the message it usually conveys will be a useful tool with which to address your quandary.

I used to believe in the school of hard knocks. My philosophy was that the way to sort out a disagreement was by beating your opponent (verbally) into submission. An unfinished argument was enough to keep me awake at night. My old self still, occasionally, rears his ugly head in the wake of rows and contemplates scenarios that would mirror Dante's version of hell.

Civility, unfortunately, is very often mistaken for cowardice. Any attempt to reach a middle ground is derisively dismissed. And yet, civility is so much needed. The teacher I mentioned at the beginning of my post did not make any judgement on whether the student was right or wrong to be aggrieved. She was more interested in the manner in which the pupil was trying to solve the problem. I applauded her approach because in the long term that child will realise that you win more through polite negotiation and tactful compromise than through all-out aggression.

It's a lesson that, sadly, has not been fully learned in today's world. We still value chest-beating rudeness over good manners sometimes. However, is it a good idea? If, as a result of constant squabbling, people lose their jobs, or don't get the healthcare they need, who is the ass? And who is the dumb pachyderm?

There's another benefit in spousing civility as a powerful ally when confronting difficult issues. It puts the onus on the other person. You say to your opponent, these are my views, which are completely different from yours. But, hey, I'm willing to meet you halfway, as long as we retain the respect we both deserve. Do you not think that people will be willing to engage with you?

Of course, sometimes we have to resort to other methods, like force, for instance, to solve problems. Good manners will simply not do. Tyrants very often laugh off any polite attempts to discuss their rule. Politicians preach civility whilst throwing mud at their foes with the hope that some of it will stick. Disagreements between atheists and religious believers have frequently descended into mere cat-calling with neither party willing to reason with the other. When faced with the above scenarios, harsh measures must fill up the gap usually allocated to civility.

Luckily, though, not everything is lost, although solutions tend to be found at a domestic level rather than in the grand, international arena. For example, in my house my children must abide by a points system, pioneered by my wife, which awards merits to those who comply with the chores they're meant to complete. Within this structure there are minus points, too, and sometimes they are given to those who don't treat other family members respectfully. And that goes for adults, too. Does it work? Yes, it does, most of the time. Yet, I've seen first-hand how easy it is to fall into the habit of name-calling and constant bickering and how difficult it is to get back on track and be nice to your brother/sister/partner again. Civility is a precious commodity whose benefits are manifold and as long as we have teachers, like my colleague, embedding it in our pupils' principles, the future can only bode well.

Next Post: ‘Living in a Bilingual World’, to be published on Wednesday 16th March at 11:59pm (GMT)

Labels: A Cuban In London, Cubans in London, I Fought the Angels, music, The Delgados