The book was 'The Kane Chronicles: The Red Pyramid' by Rick Riordan, my interlocutor was my son and the conversation was about the notes that appear inside my copy of the 'Art Tatum - Ben Webster The Album' CD. I wanted to show him what the world would be missing when the ubiquitous mp3 and its army of modern, audio formats finally took over and gave the CD, cassette (remember?) and vinyl the much-vaunted coup de grâce.

The booklet of the aforementiond record is a good example of how digital encoded formats, whilst adept at guaranteeing excellent quality of sound cannot, alas, pull off the same trick, visually and/or informationwise. The opening text in 'The Album' is a testimonial by none other than Count Basie where he regales us with an anecdote about the first time he met Art Tatum. The language is informal, facetious, self-effacing and frank. Probably the reason why it reminded my son of Rick Riordan's book.

To me, the experience of opening a brand-new CD is similar to the unveiling of fresh artwork in a gallery, in that we will reminisce on it in decades to come. Expectation, elation, satisfaction, these are some of the feelings by which I'm overwhelmed whenever I'm presented with a new record. As a non-native who arrived in London when Tower Records was still around, I remember buying music there, ripping the packaging off on the tube and listening to the CD on my player. At the same time I would be reading the lyrics, the sleeve notes or the credits.

Sadly, for my son and his chums this world is fast disappearing. He has just been given an iTunes voucher for his birthday. The problem is that we haven't got iTunes installed at home and I'm not sure that you can download the software on a PC, I think you have to have a Mac. But maybe I'm wrong. The points is that once he downloads the music he wants, it will stream through to his iPod impersonally, facelessly, characterlessly.

What can we do? The popularity of music downloads responds to a demand for faster and easier access, besides the financial benefits it brings: on amazon.co.uk isolated tracks cost roughly between £0.79 and £0.89 each, compared with the price of entire albums which still fare between ten and thirteen pounds, unless you use the marketplace with its second-hand products. So, if you have a tenner you can mix'n'match mp3s and still walk away with change in your pocket. I admit that if I was thirteen again, that would probably be the route I would take, especially because you don't have to deal with fillers, which most pop albums have. Also, as long as your iPod is teeming with music you and your mates dig, who cares? The downside is that you're only getting tidbits of the bigger picure, in fact you're robbing yourself of the opportunity to listen to a record in its entirety and thus decide which songs would appeal more to your musical taste. I don't think I'm alone in saying that there are certain 'fillers' that have become favourites over the years due to repeated listening.

I don't belong to the anti-iPod brigade. And this post is not a segue from the Bruce 'Wreck on the Highway' Springsteen column last Sunday. That one was about life's priorities vs modern living; this one is about celebrating the many joys that vinyl LPs, CDs and cassettes have brought us over the years and their uncertain future. Besides, all the music I have on my mp3 player comes from my CDs. The quality of the sound is superb and when I'm on the go or sitting on the bus, I thank modern technology for always coming up with ways of enhancing our listening experience. However, I love, LOVE the effort and creativity that go towards putting a record together. It's not just the music, after all that's why you're buying the album. It's the extras: the cover (including the artwork), the inlay, the lyrics, the accompanying booklet notes. It all helps develop an atmosphere, a setting, a background to your acoustic journey.

Let me give you a few examples, chosen at random from my ever-expanding CD shelves. Kristin Hersh's 'Hips and Makers' features artwork by Japanese artist Shinro Ohtake, who, on his website, describes himself as someone who 'takes the world as his source, using journeys, dreams and diaries to examine the inner surface of his layered perceptions'. Listen to Kristin's intimate and emotional compositions at the same time you see the cover and the effect is, at least for me, like intruding on someone's private reverie. Tom Waits' 'Small Change' contains the following quote instead of actual words in the song 'Step Right Up': "For the lyrics to 'Step Right Up' send by prepaid mail a photo of yourself, two dead creeping charlies, and a self addressed stamped envelope to: the Tropicana Motor Hotel, Hollywood, California c/o Young Tom Waits, please allow 30 days for delivery." Genius. 'Essential Brazilian Flavas', a compilation album I got for Christmas some years ago greets the listener with the following provocative quote: "So, let's be controversial from the get-go: there's no such thing as 'typical' Brazilian music". The record's fourteen tracks back up such contentious remark. In the sleeve notes to her third LP, 'Music for Crocodiles', Susheela Raman describes how the album was created. From "rehearsals, spectacular biryanis and bass amp fires at home in London" to Tamilnadu where Susheela set to "work with superb musicians in Chennai (aka Madras)", 'Music for Crocodiles' exudes virtuosity. And the testament is there, in those sleeve notes.

Occasionally CDs become photographic exhibitions. 'Kind of Blue' and 'Sketches of Spain' by the renowned trumpeter Miles Davis are prime examples. Their black and white iconic images are as much evidence of Davis' most creative period as the rich orchestrations the album features.

So, what does the future hold for the recording industry? Will my son and his chums still be able to enjoy all the accoutrements normally associated with LPs and CDs? I hope so, even if they need to be condensed into 140 characters with smileys dotted all over the gaffe.

In the meantime, I'll leave you with the booklet notes to which I referred at the beginning of my post. Here's pianist extraordinaire, composer and bandleader Count Basie relating his first encounter with Art 'Mr Arpeggio' Tatum. Unfortunately I couldn't find a clip of Ben Webster and Art Tatum playing together, so instead I've included two separate clips of these two cool cats teaching a masterclass on how to play piano and saxophone. Enjoy.

"We stopped off there and went into a bar where you could get sandwiches and cigarettes and candy and things like that, and they had a good piano in there. That's the part I will never forget because I made the mistake of sitting down at that piano, and that's when I got my personal introduction to a keyboard monster by the name of Art Tatum. Thats how I met him. I remember that part only too well.

I don't know why I sat at that piano. We were all in there to get a little taste and a little snack, and the piano was there. But it was just sitting there. It wasn't bothering anybody. I just don't know what made me do what I went and did. I went over there and started bothering that piano. I just started foooling around with it, and then I started asking for trouble, and that's just exactly what I got. Because somebody went out and found Art. 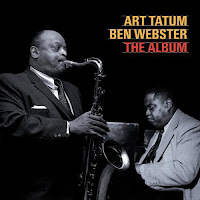 That was his hangout. He was just off somewhere waiting for somebody to come in there and start messing with that piano. Someone dumb enough to do something like that, somebody like Basie in there showing off because there were a couple of good-looking girls in the place or something like that. Oh, boy. They brought him in there, and I can still see him and that way he had of walking in his toes with his head kind of tilted.

This was several years before Joe Louis came on the boxing scene and wiped out all of the heavyweight prizefighters, but what happened was just like when a cocky boxer in the gym shows off, sparring around, and when he looked up, he saw Joe coming through the ropes. Because I'm pretty sure I had already heard a lot of tales about old Art. But when I went over there and hopped on that innocent-looking piano, I didn't have any idea I was on his stomping ground.