I recently bought a new camera for the team I head. A photo one, I mean. I was a bit fed up with our old optical device and its battery-operated mechanism. Taking advantage of a little underspending we had in our budget, I went for a brand-new, digital model.

Now, I'd be the first to admit that when it comes to modern gadgets I'm not the smartest of fellows. It takes me a while to get from A to B. But, get there I usually do. On this occasion I had the instructions in one hand and the camera in the other one and I was trying to work out the different buttons and functions. One of the latter was how to turn the photo operation into a video one. I pressed the relevant button and voilà!, I was able to make a three-second-long short clip. That's when the problem started.

After a while I wanted to reverse to the photo function but was unable to do it. I kept pressing the same button I'd pressed before and each time I was prompted to the main menu which, obviously contained all the operations associated with videos, but not with photos. I spent probably a good thirty minutes until my natural curiosity led me to press the shutter and... yes, you probably imagine the rest. The camera went back to its original and more important function: that of taking photographic images. 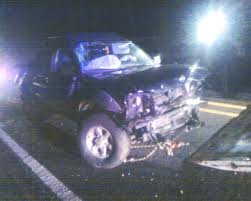 Later that evening on my way back home I had Bruce Springsteen's 'Wreck On the Highway' on my mp3 player. And it suddenly dawned on me how modern technology has come to complicate our lives so much, leaving a trail of anxiety behind it everywhere it goes. The earlier camera episode had put me in a foul mood as I couldn't quite figure out which button to press. A device that should have been a source of happiness - the photos taken by the team members would have a better quality henceforth - had instead given me cause for despair. Pretty much like I feel everytime I'm faced with a piece of furniture from Ikea, for instance.

The Boss's song, however, reminded me that not everything in life need be Daedalean. 'Wreck on the Highway', the coda of Springsteen's fifth album, 'The River', is a simple, short story made up of three characters, two of which never get to know each other and yet are intricately linked. The effect of both lyrics and music is chilling to say the least.

In its twenty verses there isn't one single metaphore or simile. What we have instead is a tale about misfortune and love told from the point of a man who goes home at the end of his working day. Whilst driving back to his house he comes across the eponymous accident on the motorway. According to him, 'There was blood and glass all over/And there was nobody there but me/As the rain tumbled down hard and cold/I seen a young man lying by the side of the road/He cried Mister, won’t you help me please.' We can only guess that the man stays with the dying fellow by his side because he later watches an ambulance driving him away. He then imagines a girlfriend or wife being woken up by 'state trooper knocking in the middle of the night/To say your baby died in a wreck on the highway'. The last stanza finds the man reflecting on the scene he was exposed to before he tells us how sometimes he sits in the dark to watch his 'baby as she sleeps/Then I climb in bed and I hold her tight/I just lay there awake in the middle of the night/Thinking ’bout the wreck on the highway'.

That a trope-free song like this has a such powerful hold on me is due in no small part to a combination of factors. First of all, two of Springsteen's cast of three are passive members in his tale. The victim of the car accident just utters one line, which is all about getting help. He probably realises that he is going to die anyway but another part of him thinks there might still be a way out. This approach renders the passage personal as we've probably met people in real life who have been involved in car accidents, maybe we're those people ourselves, scarred mentally and/or physically for life. Springsteen's working man's partner is the other passive character in this story. She is the recipient of the man's anxiety when he wakes up in the middle of the night, watches her sleep and thinks of how lucky he is to have her.

Because of the inaction of two of Bruce's trio of personages, we're left to create a narrative for them. That's the second element. It means in this case to ignore their foibles and concentrate on their virtues, or virtue rather, as this consists mainly of being pondered upon by the working man. The victim probably has a girlfriend or young wife, thus hinting at a blossoming life himself. But beyond that we're in the dark. What if he was a violent man who beat his partner up? What if they had a terrible altercation, he rushed out in his car and crashed it as a result? Any of these theories are soon relinquished as we're presented with the ominous knock on the door by the state trooper in the middle of the night. This line taps right into our basic instict. Some of us have some experience of being roused from a heavy sleep by the doorbell in the small hours. It's the harbinger of tragedy. The working man's 'baby' is the final link in this sequence. As he climbs in bed and holds her tight, he is probably thinking how fortunate he is, even if they might have had a terrible row the night before over whose turn it was to do the washing up.

The third reason why 'Wreckage on the Highway' has such a powerful effect on me is the music itself. The combination of organ and guitar add an ethereal atmosphere to the song, especially at the beginning, whereas the voice and drums adopt a more mundane and nonchalant tone. It's not strange to find the organ providing this otherwordly timbre. After all, it was the instrument of choice in many churches in centuries past. It was commonly found perched right up, near the top, the better to be closer to God, apparently. However in this instance it finds a formidable rival in Springsteen who sings in a casual way about what could be just another day in this working man's life. Together, organ, guitar and voice come up with a message delivered in the simplest of terms: live your life to the full, because you don't know if the next victim on the highway will be you.

On my walk back home that evening I imagined that the man who witnesses the wreck in the song, had probably had a tough day at work, maybe even struggling to work out a new gadget (not a digital camera, obviously, this track is from 1980, plus the man was most likely to be a blue-collar worker as that was the type of person Springsteen chiefly wrote and sang about). But I often thought that he'd had his share of problems and faced with that car accident on the way home, he suddenly realised that no matter how complicated life is, you can lose it in a second. That's how simple it is, too. About the same time this happened, I got an e-mail from an American poet who had been following my blog since earlier this year. He had travelled to Cuba some time ago and, in a tribute to his grandmother - also a poet -, had left some of her poetry books in the shelves of bookshops. Yes, I know, pretty subversive. But what I liked the most was that after an initial electronic exchange, he sent me his own work, "iPoems for the Dolphins to Click Home About". It contains one of the funnier and wittier introductions I've ever read:

"This is a book of poetry. If you are reading this right now, I
am surprised. I’m shocked. I am jolted that there is nothing
good on TV, that your Wii is not more tempting, or that you
would not instead enjoy managing Fantasy Football or
taking a walk. Sure you would not rather read the Twilight
saga? Face it, if you do not read the Twilight saga, you and
your prom date are going to have very little to talk about."

Sometimes we're so immersed in our little technological, modern, celebrity-filled world. A world that makes us angry and frustrated when we fail to grasp the importance of this or that function in our new gadget, that drives us mad with its coldness when we don't get a response from our brand-new, state-of-the-art, sophisticated devices because machines, unfortunately, are not very good at responding. It is at times like these, that I switch off and tune in to the Boss and like that man at the end of his working day, think of the 'wreck on the highway'.

Labels: A Cuban In London, Bruce Springsteen, Cubans in London, music, Wreck on the Highway