Last Sunday I had a mind-blowing experience. I went on a trip through a desert. True, lush vegetation could be spotted in the distance but in order to get to it, I had to negotiate plenty of arid land. My only companion was a 4x4 that helped me navigate the cracks, potholes and rare little bushes I found on the uneven terrain. Last Sunday I had the experience of a lifetime.

Sorry, I forgot to mention that this happened in the comfort of my own house. To be more specific, the above scenario took place whilst I was sprawled on the couch in the lounge.

Because last Sunday I travelled across someone's face. 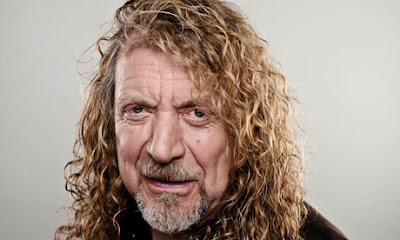 It's not everyday that you're greeted by an A2 image of someone whose oeuvre you've adored all your life. Someone who fronted a band you followed and whose music you still worship. Yet, that was exactly what happened last weekend when I opened the New Review supplement in The Observer. There, on the front page, the smirk of one Robert Plant (above) was all the encouragement I needed to sit down and enjoy one of the better interviews I've read for a long time.

However, as I devoured every word of the exchange between Ed Vulliamy and the erstwhile Led Zeppelin singer, a niggling thought kept pestering me. In fact, the intrusive reflection came with a name attached to it: Miriam O'Reilly. 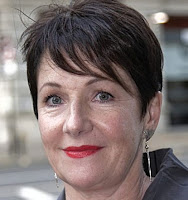 If you live in the UK, you will probably have heard of and/or read about the former BBC presenter's win in her age-discrimination case against the corporation. O'Reilly (right), who is 53, was axed from the show 'Countryfile' a couple of years ago when the programme moved from its regular Sunday morning slot to the evening time. Prior to the change, the ex-BBC presenter faced a barrage of insults: from one director allegedly warning her about her wrinkles to another one mentioning Botox. Even a cameraman apparently waved a can of black spray in front of her to cover her white roots. Unsurprisingly, her ability to perform her job was not once factored into the equation.

The reason why O'Reilly's name was on my mind as I read the interview with Robert Plant was that I kept wondering what a similar image on the front of a Sunday supplement with a fifty- or sixty-something woman would read like. It's a rhetorical question, though, for the answer would be: the main focus would be on her age and looks.

A recent piece on Annette Bening and her starring role in the film 'The Kids Are All Right', concentrated more on the fact that at 52 she hasn't had 'anything' done, than on her thespian skills. Thought the article was mostly positive, I kept asking myself at the time if I would ever read a similar feature on Jack Nicholson or Harrison Ford's facial features.

It's not a secret that as a society we're not very often comfortable with the idea of ageing. And that's putting it midly. What is disconcerting is that this attitude is more conspicuous when women are the subject of the discussion. O'Reilly follows in the footsteps of Anna Ford (62 when she 'left' her job as a newsreader at the BBC, rumours say that she was forced to go), Arlene Phillips (ex-judge of 'Strictly Come Dancing' and deemed past her use-by date) and Moira Stuart (another ex-newsreader at the BBC who apparently did not fit in the corporation's plans for HD television). Is ageism, then, intrincately linked to sexism?

In an almost comical turn of events, days after O'Reilly's win, Ed Davey, the government's employment relations minister, announced that the coalition was planning to phase out the retirement age at 65. That means that employers cannot force people out of their jobs on account of their age. If only the BBC executives had waited another couple of years! They'd probably still have their former Countryfile presenter, they wouldn't have lost face with the British public and should any of those folks in the shires complain about O'Reilly's wrinkles (unlikely, I know, I'm sure that they have mirrors in their big, massive mansions), the Beeb would have retorted, ' Well, guess what? She can stay for as long as she wants. The government says so'. But no, that wasn't the case and now there's a lot of head-scratching and soul-searching at Auntie's headquarters.

And if the above doesn't sound ironic enough, here's a further twist. Just a few weeks ago scientists in Boston suggested that there might be treatments soon to slow or even reverse the process of ageing. So, in less than a fortnight middle-aged and elderly citizens of this nation were treated to a cocktail of news through which they discovered that they could work for as long as they wanted to, provided that their employer was not the BBC, or a similar media outlet. And should life do what it always does and run its natural course, would you believe it, there's this magical potion/cream/pill that can help you, yes, you, oldie! delay the process of ageing, or even reverse it. Ha! You'll look eighteen again, you'll even look younger than your grandchildren. In fact, people will probably stop your offspring in the street and ask them how old their newborn (that's you) is. And still people thought that 'The Curious Case of Benjamin Button' was just a movie. It's the blueprint for the future, my dear fellows!

Joking aside, the obsession with age we're witnessing nowadays borders on the sinister. And the fact that it is women who feel more of this pressure to remain young, could be construed as yet another misogynistic attempt to rein in the female of the species. In a few weeks, a famous ceremony will take place in a certain part of LA. Along with the glitz and glamour there will probably be muted mobile phones in the audience vibrating to the sound of messages left by some of the stars' plastic surgery specialists with clear indications on which un-Botoxed eyebrow to raise whenever a cameraperson is in the vicinity. It goes without saying that any attempt at laughing on the part of the aforementioned celebrities will be deeply frowned upon (no pun intended, but oh, the irony of it!) by their medical advisors. Preposterous as this scenario might seem, it's already made inroads into our daily, un-celeb life.

When I took my imaginary trek across Robert Plant's face last Sunday, each line, wrinkle and furrow told me a unique story. It was a tale that combined triumphs (we can safely say that Led Zeppelin was the summa cum laude of rock'n'roll) and pitfalls (One of Plant's children, his son Karac, died aged five in 1977 and the singer almost packed it all in at the time). Botox those cracks away and you're left with no history. As one of the Zep's more famous songs goes: 'There's a lady who's sure/All that glitters is gold', we had better reassure the lady in question that she is the glittering gold, wrinkles or not. And I'm sure that she'll enjoy her journey up that stairway to heaven even more.

Next Post: ‘Of Literature and Other Abstract Thoughts’, to be published on Wednesday 9th February at 11:59pm (GMT