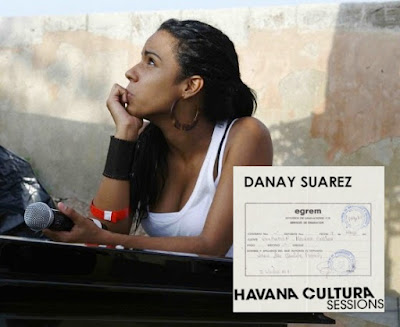 If you thought that with the release of the recent album 'AfroCubism', a collaboration of artists from Africa and Cuba, the music from the Caribbean island had reached its apex, think again. There's a new kid in town and she's rocking the house!

Danay Suárez is the latest Cuban talent to emerge from what has already become a springboard for creative expression. And Killer Opening Songs is proud to promote such honest efforts. Since 2007 Havana Cultura's sessions have become a cauldron where visual artists, dancers and musicians mix and showcase their remarkable skills.

In Danay's case, the opportunity arose when Gilles Peterson, creative director of Havana Cultura, got together with Roberto Fonseca and other musicians to rehearse for an upcoming European tour. The sessions were so successful that Gilles booked an extra day to record a few songs with Danay. The result is an amazing EP which shows off Sanchez's vocal prowess and Fonseca's superb musical arrangements.

The album's K.O.S., 'Ser O No Ser' ('To Be Or Not To Be'), weaves the Shakespearean motif into a medley of piano riffs, lyrical solos (from every instrument, including a mesmerising double bass effort by Omar Gonzalez) and vocal improvisation. The song also contains a line with probably one of the most acerbic remarks about Cuban society in recent years, in this case about prostitution ("There are materials aplenty/and they don't cost a penny/ in a warehouse inside your body/In order to build a better future for you/you need to leave your hang-ups behind"). The track ends with Danay's soothing voice intoning that Afro-Cuban classic 'Drume Negrita' (Sleep Little Black Girl).

The second track, 'Hay Un Lugar' ('There's a Place') is pure late-night, laid-back, smoky jazz. Listening to Suarez's vocal, there's no doubt that comparisons will be made with Billie Holiday, even if they might be a bit rushed.

Third song, 'Guajira' ('Peasant Woman') is a typical 'guajira-son', namely, a countryside melody built on layers of Cuba's traditional son, the rhythm that served as the basis for salsa. Once again, Fonseca riffs on the piano whilst Danay's melodic voice seems to be addressing an errant lover.

The last piece on the EP, 'En Lo Profundo' ('In the Depth') is an Afro-Cuban onslaught supported by a piano refrain. The combination of Bantu-inspired, repetitive drumming patterns (excellently executed by percussionist Vince Vella) with Danay's soaring vocals will surely remind listeners of live performances by Jill Scott or early Rachelle Ferrell.

Suárez joins an elite group of contemporary Cuban singers who refuse to be pigeonholed by genre. Guitar-wielding Yusa is often referred to as Cuba's version of Tracy Chapman whilst hip hop artist Telmary has been likened to Lauryn Hill. However these comparisons miss the versatility that characterises these singers' creative output. Danay completes this triumvirate with a voice which travels the gamut of emotions: from a strong, powerful tone to a more lyrical and harmonious one. Killer Opening Songs hopes that you enjoy the clip below. It can't stop playing it on its mp3.

Next Post: ‘Sunday Mornings: Coffee, Reflections and Music’, to be published on Sunday 20th February at 10am (GMT)

Labels: A Cuban In London, Cuba, Cuban, Cubans in London, culture, Danay Suárez, Killer Opening Songs, music, Ser O No Ser, To Be Or Not Be