The lights are down, the auditorium is in semi-darkness, nervous coughs can be heard here and there, the expectation mounts, anxiety kicks in. Someone rushes out of their seat, onto the aisle and up the corridor. A last-minute trip to the lavatory perhaps? Two presenters walk to the front of the stage carrying an envelope with them. They're both world-famous celebrities. They take turns in reading out the nominees' names. After some slight banter, they then proceed to open the envelope. The male presenter looks at the camera and out of his mouth the following words come out: "And the Oscar goes to..." The female presenter picks up from where he leaves off and finishes the sentence: "Hillary Mantel". Or is it Jonathan Franzen? Or how about Jacqueline Wilson? Maya Angelou? Margaret Atwood? Salman Rushdie?

The odds are that you won't hear any of those names this coming Sunday 27th February at the 83rd Academy Awards. And why should you, anyway? After all Rushdie et al are not actors, they didn't learn their craft in drama school but in front of a typewriter/keyboard. Leave acting to actors, I hear you say. Yet could there be something else to it? Should we not acknowledge writers' contribution to arts not just as fine écrivains but also as purveyors of drama, suspense and, above all, well-researched characters?

That an author's knack lies in his or her power of luring us into the thick forest of their narrative without caring one jot what dangerous creatures and plants we'll encounter in it, is beyond dispute. And I make no distinction between a novel, a short story or a poem. Whenever you come across well-written fiction, you are exposing yourself to somebody else's world. The writer will use his or her power of make-believe to unveil secrets that he or she might not even be aware of, and should they realise that they're sharing too much, they will be in a position to claim that all was done under the auspice of fiction. Meanwhile their work will - hopefully - affect you both consciously and unconsciously.

And yet, we would never think of labelling that kind of writing as acting. Maybe it's to do with the lack of physicality. Reading is - mostly - a passive activity, whereas acting, even when a performer is merely sitting on a chair, suggests movement. But to me there's no much difference between Tarantino's 'Pulp Fiction' with its fragmented storyline and a novel like 'Small Island' by the British writer Andrea Levy with its divided monologues. 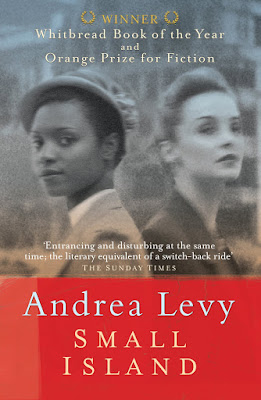 'Small Island' tells the story of Queenie, Hortense, Gilbert and Bernard in the aftermath of the Second World War. Queenie is married to Bernard who is sent away to fight in the conflict. She has all but given up any hope of seeing him come back and decides to let out the rooms in her house to Gilbert and Hortense, a married couple who have just arrived from Jamaica. Through flashbacks we learn of the leading characters' previous circumstances.

However, the most significant element in the novel is the use of monologues to signal different points of view. To this one must add the use of various norms of spoken English, from Queenie's medley of Received Pronunciation and the vernacular to Gilbert's Jamaican patois.

Levy's chief achievement is to provide an individual platform for each of her four characters to develop. Except for Bernard, whose contribution is shorter (not strange given that he is more talked about than doing the actual talking), the other three are used deftly by Andrea to depict an important period in British history as accurately as possible. Like a thespian who is well-versed in the art of imbuing his or her characters with their own peculiar traits and quirks, Levy performs a similar trick by making the reader see the world through the eyes of just the one personage in each chapter.

Easy as it might sound, the perils of writing in different voices are various, but one stands out: credibility. The writer owes it to the readers to make his characters' points of view believable, nuanced and distinct, otherwise the charge of implausibility will rear its ugly head. Under normal circumstances in most works of fiction there are usually one or two weak characters that we, as readers, think could do with some tweaking here and there. When the point of view shifts to the first person singular, we feel that our responsibility has increased tenfold. Same with actors. A performer doing rep will probaly take part in a matinée production of 'Much Ado About Nothing' and later on will play Iago in a very different setting. It's not just the lines he will have to learn, but the gestures and mannerisms that set both characters apart.

This is the feat that Andrea Levy pulled off with 'Small Island'. In order to write as accurately as she did about an era that preceded her (she was born in 1956) she had to inhabit the role of each and every member of her dramatis personae. The result is an amazing novel whose views on class, gender and race are precious material for people like me, interested in the UK's rich history, even if this information arrives in the form of ficton. It's also further evidence that the drama techniques pioneered by the likes of Stanislavski, Brecht and Artaud have escaped the narrow confines of theatre and affected the literary landscape, albeit unconsciously. I seriously doubt that Levy sat in front of her keyboard and thought of disturbing the reader's subconscious mind through a mix of light, sound and visual images which would take precedence over the written word. And yet in 'Small Island', I found myself sometimes focusing more on the visual stimulus than the accompanying text, as in this passage when Hortense arrives at Queenie's house for the first time:

"But when I pressed this doorbell I did not hear a ring. No ding-a-ling, ding-a-ling. I pressed once more in case the doorbell was not operational. The house, I could see, was shabby. Mark you, shabby in a grand sort of a way. I was sure this house could once have been home to a doctor or a lawyer or perhaps a friend of a friend of the king's. Only the house of someone high-class would have pillars at the doorway. Ornate pillars that twisted with elaborate design. The glass stained with coloured pictures as a church would have. It was true that some were missing, replaced by cardboard and strips of white tape. But who knows what devilish deeds Mr Hitler's bombs carried out during the war?"

Of course, authors' natural shy disposition (the majority, that is, some others are unashamed publicity-seekers. Stop hiding, Rushdie! I'm talking to you!) makes them unlikely performing material. And they do get their just reward for occasionally researching and becoming their characters. The Bookers, Whitbreads and Oranges attest to that. However, with the amalgamation of many art forms (sculpture with dance, poetry with video) it's not too far-fetched to believe that at some point in the near future we'll see a world-famous celebrity saying: 'And the Oscar goes to... the author'.

Next Post: ‘Sunday Mornings: Coffee, Reflections and Music’, to be published on Sunday 27th February at 10am (GMT)
Posted by A Cuban In London at 23:59

Labels: A Cuban In London, Andrea Levy, Cubans in London, literature, Of Literature and Other Abstract Thoughts, reading, Small Island