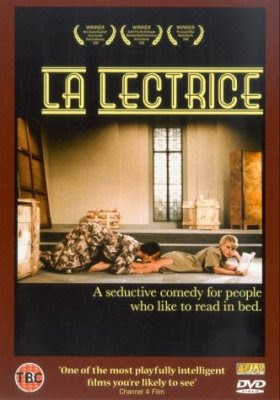 I'm sure that you will agree with me, my lovely book-worm readers, that going to bed with Atwood or Rushdie is one of those pleasures in life that cannot be measured. Before you jump to the wrong conclusion, that of me advocating licentious literary displays, let me come clear. I'm referring to the simple act of reading in bed. Or being read to, which is better.

Constance/Marie’s clients include a disabled young man, a general’s widow with strong communist leanings, a company director who can’t handle social interaction very well and a lascivious judge. Along the way we’re taken on a journey through some of literature’s classical works. Tolstoy, Duras and Sade are just some of the authors who cameo in the film.

“La Lectrice” poses various questions: is reading a solitary activity or can it be shared? If shared, do you have to possess a particular voice to read to another person or an audience, or will your ordinary one do just as well? Can being read to change the way we interact with people?

The film benefits from a strong direction (Michel Deville) and leads, but occasionally it affects a false tone of sophistication. On top of that some of the nude scenes are gratuitous, in my opinion, especially after the playful atmosphere at the beginning. Saying that, Constance/Marie’s decision at the end of the film to refuse to read to the lascivious magistrate and his friends a passage from Sade’s “120 Days of Sodom”, is evidence that Miou Miou’s character is anything but a puppet.

I would recommend that you watch this film with a group of like-minded friends who are as keen on reading as you are, preferably on a Saturday night. Who knows, you might even arrange a reading session after!