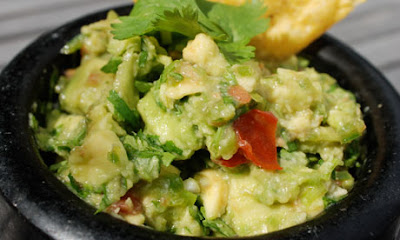 I love avocadoes. And now my son does, too, which fills my heart with glee. It is said that if you were to be stranded on an island and you had the opportunity to choose just one kind of food that you could eat every day in order to survive, avocado would be the most appropriate and healthiest option. It contains a high percentage of monounsaturated fat, vitamins B, E and K and fibre.

In Cuba we have a funny way of finding out whether to use an avocado for salad or dip/paste. We shake the fruit close to our ear (cue puzzling looks from other customers in my local supermarket) and if we hear the seed inside it moving, that means it can be added to any green salad you're preparing. We call that type of avocado, 'aguacate aguachento' (watery avocado). If the seed remains static, we press our fingers on the fruit skin instead to assess its ripeness. If they sink, then we go for the paste.

Guacamole is not very common in Cuba as it is in Mexico and other Latin countries in Central America. Hence my introduction to this dish came only when I was in my twenties, courtesy of a Mexican family who lived in Havana at the time and with which I was acquainted. I found their guacamole quite spicy for my taste, if truth be told, but after almost thirteen years in Britain where I've had th pleasure of occasionally tucking into Mexican food, I've grown accustomed to the hotness (as in spicy).

The recipe below is by Felicity Cloake, a writer specialising in food and drink. I have to admit that I don't include tomatoes when I make my guacamole, just try to keep it as simple as possible. Plus, I like using lemon juice as opposed to lime, or garlic dressing if I haven't got any lemons. This recipe is perfect as a light lunch on a rainy day, followed by some hot 'mate', drunk, preferably in a customised gourd. Just, you know, to keep things as Latin as possible.

1. Put a teaspoon each of the chilli, onion and coriander into a pestle and mortar, along with a pinch of coarse salt, and grind to a paste.

2. Peel the avocados and remove the stone. Cut into cubes, then mash into a chunky paste, leaving some pieces intact.

3. Stir the chilli paste into the avocado, and then gently fold in the tomatoes and the rest of the onions, chilli and coriander. Add lime juice and salt to taste. Serve immediately, or cover the surface with cling film and refrigerate.

And if we're to keep things as Latin as possible, then it should follow that my first musical offering tonight has Latin written all over it. Late Cuban singer Ibrahim Ferrer joined forces with the British pop band, Gorillaz, and together they released this gem of a song. Full, like a ripe avocado.

To me, grinding the chilli, onions and coriander is like listening to Franz Ferdinand's guitars. The workout I get from combining those ingredients in a mortar is similar to the syncopated beat of the Scottish band. Marvellous.

Once my guacamole is ready, it's time to sit down, put my feet up and enjoy it. Just the way I enjoy how Caetano's voice sounds: mature, confident and serene. The water is boiling and pretty soon I'll have a gourd with steaming 'mate' in hand. Happy eating!

Next Post: 'Birthday Post: Reflections and Music', to be published on Tuesday 16th November at 12:01am (GMT)
Posted by A Cuban In London at 23:59