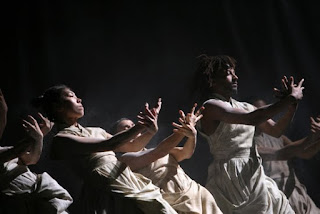 "I died from minerality and became vegetable;
And from vegetativeness I died and became animal,
I died from animality and became man.
Then why fear disappearance through death?
Next time I shall die
Bringing forth wings and feathers like angels;
After that, soaring higher than angels -
What you cannot imagine,
I shall be that."

It could have gone so wrong for Akram Khan's latest work, 'Vertical Road'. With its nod to Sufi traditions, its lack of script but abundance of isolated ideas, Khan's new choreography could have come across as an alienating and pretentious piece of pseudo-art. Instead, though, the innovative director has created yet another masterpiece which will definitely take its place next to his very own magnum opuses 'Sacred Monsters' (featuring ballerina Sylvie Guillem) and 'zero degrees' (a collaboration with fellow performer Sidi Larbi Cherkaoui, sculptor Antony Gormley and musician Nitin Sawhney).

Coincidentally, it's Sawhney's score that underlines this, at times delicate and at times disturbing, piece (second clip below). A Jesus-lookalike dancer, Salah El Brogy, stands behind a large screen on one side of the stage. On the other side seven dancers reach out to this god-like presence. Are they on a quest to find their spirituality? Is El Brogy their collective past? For the next hour or so the performers go from one extreme to the other, from convulsive, jerky movements to more lyrical and poetic ones, thus, bringing a much needed vulnerability to a choreography that has a visceral and raw outlook.

According to Akram Khan (first clip below), the inspiration for 'Vertical Road' came from his own questioning about the need for spirituality in today's world. Hence the upwards movements representing the quest towards a more unembodied approach to our lives, whilst the horizontal motions stand for our lives as we know them. But that's as far as any coherent theory about this work goes. The piece has a life of its own. I would dare to say that in the same way Pollock allowed his brushes to do the talking for him in his abstract works (all that spilling paid off in the end, methinks), Khan uses his eight dancers' energy and strength to explore issues such as collective past, violence and love.

The music is loud, raw and brutal and, mixed with an almost bare stage, complements perfectly the spiritual message Khan is intent on conveying. Yet, inside this musical onslaught theres is a discernible frailty. I wasn't surprised when (spoiler alert!!!) the screen is ripped at the end.

When I read Rumi's poem in the programme before the show I prepared myself for an abstract piece where the place spirituality occupies in the world nowadays would be given a metaphorical interpretation by Khan's eight dancers. At the end of the show I realised that the person 'performing' the figure of speech was Akram himself. In my opinion he was explaining what his mission as an artist was. 'Vertical Road' was his way of saying "Next time I shall die (...)What you cannot imagine, I shall be that."