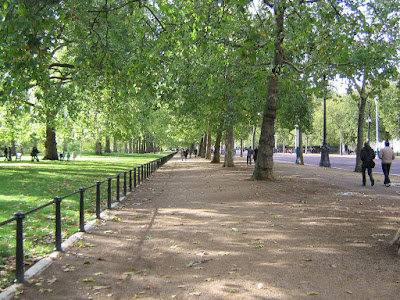 Last week on my way to work I saw a leaf slowly falling down from a tree. As soon as it touched the floor, Bach's 'Keyboard Concerto No. 7 - Andante' kicked off on my mp3 player. On the surface there was nothing strange in that scene. We're in autumn with trees performing their annual strip-tease as usual, whenever I don't cycle to work, I walk and I usually take my mp3 player with me. I've got a few pieces by Bach on it. But there was a different smell. a different feel in the air this time around. Then it hit me. That leaf, was not just a leaf, it was a page coming off my life's calendar. I was about to turn forty-minus-one. It was nature's way of telling me that I was (am) getting older. Maybe wiser, too? I don't know, I hope so.

The second movement of Bach's 'Keyboard Concerto' has an interesting story behind it. According to Wiki, the musician intended to compose a full harpsichord concerto but didn't alter much the strings parts, resulting in the keyboard instrument being overwhelmed by the rest of the ensemble. You can almost hear the piano in the second movement (Andante) wanting to free itself from the cello, violin and viola's claws (especially at 3:46 in the clip below), only for the latter three to trap it again.

In certain ways my life's been like that, usually seeking to gain and preserve my independence. Sometimes, especially when I still lived in Cuba, this struggle was played against the backdrop of a gigantic Greek chorus whose main intention was to say my lines. The only problem was that being the proud owner of a good voice, I didn't see the need for a translator. There were times when the ensemble took it upon itself to place a mask on my face to hide my true feelings. It was usually a smiley one. A thespian emoticon, if you like.

But at some point in my life I shook off the yoke of that F Murray Abraham-like figure ('Mighty Aphrodite' by Woody Allen, since you ask). The results were mixed: success followed by failure followed by success. Yet, isn't that what life's about? Who wants to be pinned down by a tyranny of strings when there's a whole world of ivories to aspire to? Unlike Bach's concerto, I've been satisfied thus far with my solo role. My harpsichord escaped the violin and viola's claws many years ago and it's not returning to their grasp any time soon.

That falling leaf, set ablaze by the most colourful autumn we've had in years in the UK, Bach's musical in-fighting playing in my ears, my birthday less than a week away. This is what Kundera would call 'a chain of fortuitous events', the concept that underlined his 1984 masterpiece 'The Unbearable Lightness of Being'. But instead of being trapped in a 'ménage à quatre', like Tereza, Tomas, Sabina and Franz, I am walking, unshackled and unbound, on a magic carpet woven by the dexterous hand of Mother Nature and made up of red-gold, copper-tinted, yellow-tinged leaves. Autumn always reminds me why I'm glad to live where I live, with whom I live and how I live. Here's a toast to myself on my fortieth-minus-one birthday and, also, to my beloved city, Havana, with which I share my birthday (although she is four-hundred and fifty-two years older). And to you, fellow blogger, thanks for reading me.

Photo by the blog author

Next Post: ‘Exercises on Free Writing’, to be published on Sunday 21st November at 10am (GMT)