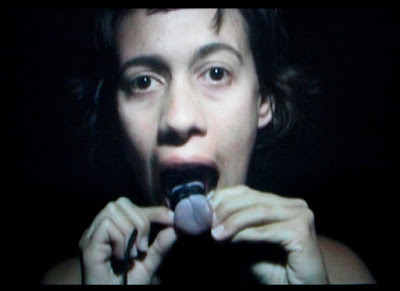 A red bean breaks away from its brethren and starts wriggling blithely nearby. Away from the crowd it stands on its own dictating its own teeny weenie bean’s fate. At first some of its ‘comrades’ feel apprehensive about joining him. Finally, a handful of them shed their inhibitions and follow the lone fun soul. For the next ten or fifteen seconds they all enjoy the newfound freedom. Suddenly we hear a thud. A hammer has just smashed the leader. As all the others quickly go back to the ranks wherefrom they had just decamped seconds before, the camera zooms in on the lone fun soul. We seen the bean’s innards, shattered to smithereens. The name of the film is: “El Que No Sabe Es Como El Que No Ve (Not Knowing is Like Not Seeing)”.

A woman ties her tongue with a piece of thread. Round and round she winds the cord. She continues to do this until it is impossible for her to speak. The name of the film is: “Autocensura (Self-Censorship)”.

A long canvas projects an image of the sea. From a distance the visitor is treated to the vision of waves crashing against the shore, some rougher that others. On closer inspection, the waves turn out to be fish hooks poking out of the canvas. A gallery assistant cautions people against coming too near the piece. You may get hurt. In the same way you may do if you take to the sea on your own trying to surmount those ninety miles that separate your daily grind from your utopia. The name of the panel work is: “Isla (Island)”.

Welcome to the exhibition ‘States of Exchange: Artists from Cuba’.

It has been a topsy-turvy week for me. Parallel to the events taking place in Cuba, I have been reading Jung Chang’s vivid memoir ‘Wild Swans’ and my mind has been flying rampantly through those Chinese fields that have gathered so much history, sweat and tears. And blood, too. Through three generations of Chinese women, including hers, Jung relates the travails that the population of that Asian nation have had to endure under emperors, Kuomintang soldiers and Mao’s Red Guards. So the last thing I needed was to torment my feeble mind even more with an exhibition about dissidents in Cuba.

Yet, it was worth it. Every single bit.

Political dissent in Cuba is a four-letter word. Some people, mainly from the state’s apparatus, claim it does not exist, those of us who were born and raised in the Caribbean island, say otherwise. So, it is refreshing to attend a display of intelligent works by artists who experience the daily drudgery of Cuban life in London.

The gallery Iniva, situated at Rivington Place, in fashionable Shoreditch is the perfect venue for this exhibit. Greeted by warm and friendly front of the house staff, we made our way in and from the very reception the works of art start telling a story of their own.

First one up (literally ‘up’) is “Cambio de Estado (Change of State)” a piece by Jeannette Chavez where the whole ceiling is covered by military epaulettes, evoking, for me, at least, the military power yielded by the Cuban government throughout almost five decades.

Once inside the first exhibition room, the spectator will see different works that function not only as a parable of what is happening in Cuba at present, but also as an analogy with current events in other nations. “Historia (History” is a mechanical sculpture with a pen attached to one circling arm and an eraser attached to the other. As one arm leave a mark on the glass, the other one wipes it out quickly. Historical revisionism? Unlearned historical lessons? You decide.

The aforementioned “Isla (Island)” takes up approximately six metres of the wall on which it is mounted. It is a monumental work of art with a powerful explicit message.

Human beings’ relationship with money is analysed by Diana Fonseca in her piece “Pasatiempo (Pastime)” where the rubbing of two coins on one of her hands leaves a stain. The money disappears, the stain remains. It made me think of the dreams and moral values that have been shattered and sacrificed by the pursuit of money in the new Cuba.

One of the most poignant pieces is a video called “La Gloria Borra La Memoria (Glory Erases Memory)”, which features the aforementioned beans (they deserve an Oscar surely) as one of them, again, another leader, tries to break through a hard wall. Incapable of doing it on its own, it convinces the others to join based on the ‘Unity is Strength’ maxim. Together they break through the wall and the leader climbs to the pole position of a set of stairs. All the other beans remain below, but whenever one attempts to climb up to where the leader is, it is sent down to its death. Finally, the leader floods the stairs, thus, drowning the rest of its compadres.

Through the power of art ‘States of Exchange’ has told a story about money, power and communication not just in Cuba but also in our globalised world in the 21st century. This is a must-see event for all who enjoy a spiritual and mental challenge. And in the case of “La Isla (The Island), even physical.