He Did It His Way (Grave) 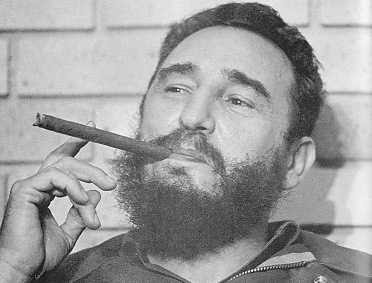 And now, the end is near

And so I face the final curtain
My friend, I’ll say it clear
I’ll state my case, of which I’m certain

I’ve lived a life that’s full
I’ve traveled each and every highway
And more, much more than this,
I did it my way.

As I was making my way back from the Tate Modern today with my wife and our two young children I could not stop thinking about the news that greeted me first thing this morning courtesy of the BBC. Fidel Castro, the leader of the Cuban Communist Party, the man who has been in power for almost five decades, has stepped down. And immediately Paul Anka’s re-worked classic, popularised by Frank Sinatra, came into my head.

It’s hard for a British citizen to understand the stature of the outgoing leader. After all, the Cuban president outlived nine British Prime Ministers and ten American dignitaries. And he did it his way. In the case of the US presidents, some of them tried to give him an early retirement on more than 600 occasions allegedly. Whereas in the UK a politician occupying the top post is usually in power between five to six years during which he amends old laws and develops cogent domestic and foreign policies (except for both Margaret Thatcher and Tony Blair who were in power for ten years each), in Cuba we always had ‘El Caballo’ (The Horse) to look after our own affairs, a little bit like a paterfamilias making sure that his offspring was well-fed and well-taught. Although the well-fed is a moot point. A British prime minister will normally spend the first couple of years of their premiership implementing the programmes that made up their election drum-roll, whilst using up the remaining time to ensure that they got re-elected. In Cuba’s case, the man who has just stepped down had to contend with an illiterate nation in 1959, an illegal embargo a couple of years after and a crumbling economy to top. And whether people loved him or hated him, what we must bear in mind is that he led probably the most profound social, political and ideological revolution ever to have visited upon Latin American shores. That is not to say that the maximum leader was always faultless. Through a cult of his own personality, albeit with no statues in sight à la Stalin, an efficient neighbourhood surveillance system and a stranglehold on the media, Fidel’s grip on the everyday lives of Cubans has been at times absolutist and autocratic. Opinions have always differed as to whether this was brought about by the US blockade, or if by a self-imposed embargo. The former idea has been voiced mainly by armchair socialist intellectuals from Europe and North America, the latter has been the reality-based experience of many Cubans both in Cuba and overseas.

Fidel’s role as a cunning statesman should not be downplayed either. When the OEA (American States Organisation) evicted Cuba in 1962 due to its Marxist inclinations and its incompatibility with the Inter-American system, the Caribbean island’s market narrowed down to almost zero. This was one of the main reasons behind the decisions that led to Cuba becoming an ally of the former Soviet Union in the mid to late 60s. The surprising outcome of this arrangement was that on turning into Washington’s bete-noire, the late Cuban leader garnered a reputation as a fearless ‘caudillo’, capable of upholding the principles of socialism. A system that, even our National Hero, José Martí, was wary of endorsing.

Fidel’s role in Cuban society and politics was not restricted just to being leader of the Cuban Communist Party. He was also head of the Revolutionary Armed Forces (FAR), State Council and Ministers’ Council. As if this was not enough, he also branched out into other unofficial positions. And it was maybe this ubiquity of his that polarised his supporters. He masterminded the famous Ten Million Sugar Cane Harvest whose main objective was to improve the financial situation in the Caribbean island. To achieve this, the government concentrated all its efforts on producing the targeted amount of sugar by razing entire fields and planting sugar cane. Tens of thousands, if not hundreds of thousands of people were mobilised to the countryside to work the fields, including personnel from the armed forces, to make this dream come true. In the end only between six and eight million tonnes (figures vary) were produced, but the effect was calamitous as the land that was used to plant sugar cane could not be utilised for anything else. Some experts point at this moment in time as the beginning of the end for the sugar industry in Cuba.

Another role ‘El Comandante’ took on himself was that of journalist-in-chief. It was under his mandate that the Cuban media became a homogenous, uniform mass devoted to complimenting and eulogising the regime, thus, clipping its wings of any possible negative influence. With endless stories on the evils of capitalism and the benefits of socialism, the Cuban journalistic apparatus became formulaic and predictable. Occasionally it would highlight an issue of particular importance when it was no longer possible to conceal it, as when it addressed the prostitution situation in the mid 80s, a thorny topic that was already being talked about, although sotto voce, behind closed doors.

It was as an educator and health devotee that Fidel found more success and acceptance in a population that up until 1959 had a large deficit in the construction of new hospitals and schools. The special attention that these two sectors attracted from the Cuban president made it the cornerstone of the Caribbean island social reforms and put Cuba on a par with various nations of the developed world in terms of access to health and education. The downside was that as the number of graduates increased, so did, too, the level of politicisation they were subjected to. Nonetheless, it would be catastrophic if now that Fidel has bowed out of the political arena these achievements went to waste due to Cuba following the same privatisation path travelled by the former socialist states of Eastern Europe.

That has always been the question posed to me by some of my friends and acquaintances and it has also been a quandary plaguing my mind for a long time. What now?

Well, I do not know. And that’s the honest answer. We have been used to just the one person holding so much power for so long that we are now in the same situation as those youngsters who, when faced with a long weekend on their own without Dad and Mum, end up wrecking the house and smashing the china.

However, amidst the rubble, a light shines through and this is the beam I would like my nation to follow.

There are four principles, in my understanding, that Cuba should follow: the development of a free media and an independent judiciary are the first two. Economic and financial opening to foreign investors (as long as cherished achievements like education and health are not touched) and accountability should be the other two.

The establishment of these four tenets will not happen overnight. We have depended too much for too long on the ‘he who has a friend has a sugar mill’ mantra and I do not think that we will see it overturned just like that. So patience is paramount and so should be the drive to change our mentality. Small and medium private enterprises should be encouraged. The one-party system should be eliminated. And free elections held where everyone has their say.

I have not mentioned the US embargo and its negative influence over Cuba because that, too, is a hot issue. I do believe that given the chance to attack the Caribbean nation, our northern neighbours would not hesitate to do so. Anyone thinking otherwise should go back to his or her history books and read what happened in the 60s, 70s and 80s. I still remember US planes flying overhead when I was younger. Government propaganda or not, it is the gospel truth that the US wants a piece of Cuba and as we now head into another phase of our country’s social, political and economic development we need to remain alert to what happens around us.

I hope there is no bloodshed, I yearn for a democratic opening on the island, even if it takes some time and above all I would like Cubans to remember that in times when many nations in Europe and North America use hyphenated nouns to label the various ethnic minority groups that make up their polities, our main identity marker is still being Cuban. As Ol’ Blue Eyes sang it: when there was doubt/I ate it up and spit it out/I faced it all and I stood tall/ and did it my way.