The Fidel I Knew (Finale: Presto) 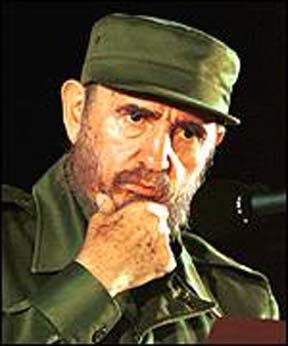 In 1988, amongst the many events that left a mark on my life as a seventeen-year-old college student, one stood out the most. That was the year that I enrolled in the MTT (Territorial Troops Militias). I say enrol, but it is only fair to say that I was almost coerced to join in, as I was one of the few pupils who was not already part of the Youth Communist League in my class. However, it is also fair to say that being a male adolescent full of hormones wreaking havoc inside my body I was looking forward to the military challenge that this opportunity presented. Little did I know what was in store for me.

The MTT, as a body, was a branch of the Cuban Armed Forces, and it was supposed to be a voluntary, selective and territorial movement whose main function was to assist in the defence of the country. As a new member of this organisation I had to go out training some Sundays with a whole brigade made up of elderly people, other students, workers and women. Women represented half the force of the MTT. I must admit that I never felt daunted by any of the tasks demanded of me, which included, shooting, digging trenches, and crawling under barbed wire.

1989 found me fretting over my university admission exams. The rules had just been changed the school year before which meant that it was no longer on academic average that one could opt to go to further education. We had to sit three tests in order to progress and since one of them was Maths, I was not sure anymore whether I would get the course I wanted.

All that was put aside when I was told that I would be part of the barrier guarding one of the roads during the May Day March. I would be part of the MTT division that would rope 37th Street off. And as a bonus I would get to see Fidel’s motorcade filing by. I could not wait to get into my green olive trousers and blue shirt, the MTT official uniform.

In 1989, despite some doubts already seeping in, I was still a true believer of the Revolution. Inside me I yearned to belong to the Youth Communist League and got very upset when I was rejected on the grounds that I was not ‘combative’ enough. Which meant, in short, that I did not grass people up. So, when the opportunity arose to serve my country and to see up close and personal the leader of the Revolution my little young heart started jumping up and down.

The day arrived and we all gathered on Paseo Avenue and Zapata Street, two of Havana’s main arteries. We were split into little groups with a leader. Mine was a man who had served in Angola and had plenty of military experience under his belt. His voice was firm but reassuring. At around 12pm we were assigned our posts.

Because the May Day March usually began very early, people would come from afar in the designated means of transportation. Sometimes they would choose their own. Buses would be diverted and traffic would become chaotic. All this far from creating a negative atmosphere made the people come together even more.

By the time the leader pointed at the spot I would be guarding, it was past midday and I had missed the chance to use the toilet. This was a problem. A couple of years before I had been diagnosed with kidney infection and the doctor recommended that I take as much liquid as I could. The year after, the infection attacked again and our GP was even sterner, warning me that failure to follow his orders would have dire consequences. As his words replayed in my mind now, my bladder decided to play up and all the liquid I had drunk before (roughly a bottle of water) demanded that it be let out.

Soon after, hysterical waves of ‘Fidel! Fidel!’ roared from the north of Revolution Square. My mind had been too occupied with the thought of liquid evacuation to realise that our president was about to pass in an open car. All of a sudden ear-piercing shouting burst out all around me ‘Long live Fidel! Long live Fidel!’ Passers-by in front of me stood up and jumped in delirious excitement, their raised hands waving frenetically little Cuban flags. I, too, joined in, but more from the desperation to keep my body in motion and thus not wet my trousers than just from mere elation at seeing the leader of my country.

What followed after could only be described as agony. Fidel was already famous for his long speeches, which could last several hours, and as my condition worsened, his enthusiasm to talk grew. Thus, more than three hours passed. I was almost bent over and my eyes were watered. Our leader came over to check our position a few times and to make sure that we were not letting any strangers through. When he saw me in my miserable state he asked me what the matter was. After giving him a short explanation, he shrugged his shoulders and told me that since the speech was about to wrap up any time soon, I had better wait it out. He mentioned the words patience, revolutionary duty and courage. A mental image came to my head of a broken urinal on someone’s head.

Finally at around 4pm Fidel said five magic words that have forever stayed with me: This is my last reflection. That was it! I thought and so I decided to hold my urine a tad bit more because soon I would be free and could you believe it, I had already my eye on a little bush nearby. Forget toilets, let’s go tribal.

It turned out that Fidel’s last reflection was a red herring. True to his word, though, it was indeed his last reflection, but it lasted two more hours. And at around 6pm, as the din of the attending masses drowned the noise coming from the coaches and trucks in the vicinity revving up their engines in order to set off, I looked behind, looked again to the front, looked back once more and made off to the bush I had paid so much attention to before. I would like to think that the plants I watered so contentedly then went on to become beautiful flowers.

That was the only time I saw El Comandante so close but it was rather my bladder’s stoic resilience that I have always remembered this occasion for.