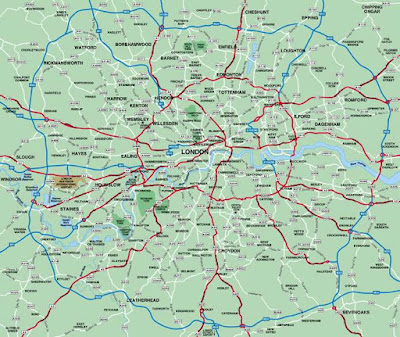 In his remarkable novel, 'The Unbearable Lightness of Being', Milan Kundera tells us how six fortuitous events brought Tereza and Tomas together. It was only a complex neurological case that led Tomas to Tereza's town, when he had to replace the chief surgeon at his hospital due to the latter suffering from sciatica. Although the town had several hotels, Tomas happened to end up at the one where Tereza was employed. He also happened to have enough time to kill before his train was due to depart, thus dropping by the restaurant where Tereza worked to have something to eat. Tereza happened to be working on that night and also happened to be serving Tomas' table.
The trivia game 'Six Degrees of Kevin Bacon' states that any actor can be linked through their film roles to the Hollywood star.
The Roman street system, based on the 'all roads lead to Rome' principle, aims at establishing a symmetrical system whereby most main avenues and roads will lead to a main point, easily recognisable to the motorist, pedestrian or cyclist.
Now, tell that to a Londoner.
Whereas in Havana most main streets will lead to El Malecón (seawall), based mainly on this Roman system adopted in most European countries and some in Latin America, in London, on the other hand, the road system seems to have been concocted to confuse the foreigner. Take the wrong turning and rather than heading for south London you'll end up in Canary Wharf in the eastern part of the city. Forget to check the A-Z before you set off and you will be contemplating endless one-way streets, multiple cul-de-sacs and mind-blowing round-abouts that will drive you nuts. What is it that makes it so hard to drive in London? The answer is that this city is the result of the union of two cities. So you can imagine how huge it is. And this aspect also renders London a marvellous place to drive in, contradictorily. Because when you do get it right, use your A-Z and as many shortcuts and back streets as you possibly can, you will end up with a succession of 'coincidences' like the ones featured in Kundera's novel and Bacon's game that will make your journey a pleasant and satisfying experience.
Music is like that sometimes. Certain artists' oeuvre can be analysed through the musicians they collaborate with, pretty much à la Bacon. The result is as eye-catching and stimulating as Tomas and Tereza's 'six coincidences.
For instance, Al Di Meola is an acoustic guitarist who has played with some of the greater performers ever. One of them was Paco de Lucia. Paco de Lucia has shared the stage with many musicians, one of them Larry Coryell, the brilliant jazz fusion guitarist. Larry Coryell has collaborated with people like Miles Davies, who used John McLoughlin's services on his album 'In A Silent Way'. John Mc Loughlin has played alongside Al Di Meola occasionally. We come back full circle.
And we also come to the end of the road this week. Or musical road I should say. The only reason why Tomas and Tereza died together was because six fortuitous incidents linked their lives forever. Kevin Bacon continues to be an extraordinary actor, 'six degrees' theory notwithstanding, most main roads, at least in Havana, still lead to Rome, or El Malecón for that matter, and in London, sometimes streets will not drive you round the bend, because you will happen to find the important left turning before it is too late.
Copyright 2008
Posted by A Cuban In London at 22:08