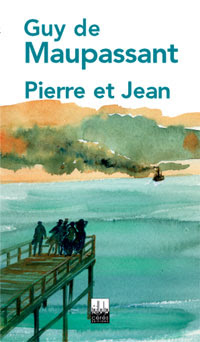 French arrived in my life in the autumn of 1994. I know that the title of this column deals only with the Spanish-English daily goings-on of my existence as an immigrant in the UK but please bear with me on this one. French and German have been two faithful companions for many years and although lately they have fallen by the wayside on account of me living in Blighty now, the truth is that when I recently picked up a novel in the Gallic language the rapport was immediate and it felt as if that lexicon had still been with me all these years.
Pierre et Jean had been given to me as a gift aeons ago by a Frenchman I had to translate for when he visited the Havana University Folkloric Ensemble in 1994. By then I had already done four months of an intensive course on French and my teacher had turned out to be so good that already I could hold a conversation in that difficult European language. For some reason or other the book lay unopened for a long time until I came to live in Britain. And all these years I was completely oblivious to this little gem that was tucked away in my bookshelf.
This is a novel that could very well fall into the psychological genre. Two brothers, Pierre and Jean live with their parents in L'Havre, Normandy. One day they receive a piece of news that will alter their lives forever and put a chain of events in motion that will test their loyalty towards one another. One of his father's friends has died leaving Jean, the younger sibling, as the sole heir to his fortune. Pierre, on hearing this news, is taken aback, for he was also acquainted with the late fellow and cannot understand why he has been left out. Little by little the plot unveils surprises for the reader that Maupassant, very expertly, distributes evenly throughout the book.
When I was still at the French Alliance in Havana I got into the habit of reading in French. It could be magazines like Cahiers du Cinema or books like 'L'Etranger' by Albert Camus. The truth is that I developed a taste for reading in this language that is so close to my native Spanish.
And therein lies the fun: the language. Take this example. Pierre has just paid a visit to a young woman who works in a cafe and who is very keen on him. On learning that Jean has inherited such a vast fortune whilst Pierre has been ignored, she, very innocently, mentions en passant that that could be the reason why the two brothers do not look alike, Pierre is dark-skinned whilst Jean is blond. Pierre's reaction is to confront the woman trying to find out what she means but her explanation does not yield a deeper response. Here is what Pierre thinks as he leaves the cafe (apologies for the lack of French accents. My keyboard cannot produce them).
'Qu'avait-elle pense? Qu'avait-elle sous-entendu dans ces mots! Certes il y avait la une malice, une mechancete, une infamie. Oui, cette fille avait du croire que Jean etait le fils de Marechal(his father's late friend).
L'emotion qu'il ressentit a l'idee de ce soupcon jete sur sa mere fut si violent qu'il s'arreta et qu'il chercha de l'oeil un endroit pour s'asseoir.'
Thus begins a mental process that torments Pierre for the next two quarters of the book. As the tension rises, the language acquires a colourful and mournful tone. Here is another example after he sets off for the harbour and watches the people coming and going:
'Mais tout a coup, comme s'il s'eveillait, il les apercut distinctement; et une haine surgit en lui contre eux, car ils semblaient heureux et contents'.
The very confession Pierre makes to himself about feeling hateful towards people he runs into in the harbour acts as a preamble for the last scene where he confronts his own brother with what now looks like the truth. His mother slept with Marechal behind his father's back and begot a son by him. His fury and despondency send him off on a cruise to The United States of America
Linguistically, Pierre et Jean is a long collage of adjectives and metaphores that describe the Normandy of mid-19th century in great detail. Possibly influenced by the impressionist movement that was already making waves in these years, the novel is a long brushstroke with undefined contours. Each character is nuanced and the language serves to reinforce this.
All in all, my experience of going back to French was like bumping into an old friend. After the initial euphoria, the long-lasting embrace and the warm words, you realise that their essence is the same, and the core is the same core that attracted you to them all those many years ago. And then you smile.
Copyright 2008
Posted by A Cuban In London at 20:25