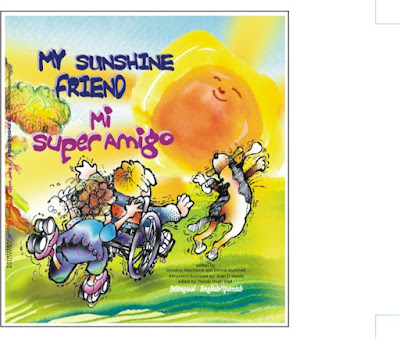 - ¿Cuánto' año' tiene'?
- ¿Uh? What is it again?
- ¿Cuánto' año' tiene'?
- ¿Cuuu... áan..to... año'...?
I had to stop reading the newspaper right there and then, turn around on the bench I was sitting on and correct Son. And try to achieve this without laughing my head off. You see, we were in the park, and he was trying to tell a British man how to say 'How old are you?' in Spanish. The whole situation was comical, really, the fellow asking us where we were from after he overheard us speaking in Spanish, then after explaining to him that I was Cuban and Son had been born in the UK, but was fluent in Spanish, he attempted to dig out some old-forgotten Spanish expressions he'd long learnt, probably on a holiday to Spain. What caused my cackle was Son's accent. I had already noticed on our holiday to Cuba earlier this year that he'd taken on a little bit of the 'canta'o' (singing) we Cubans have when we speak, especially those coming from the east of the country (this is typical of me, old 'Habanero' prejudice, so, apologies to readers/posters/fellow bloggers). His voice pitch went up by a few decibels in tandem with my fellow countrymen and women and his vowels and consonants became less nasal and less explosive, for instance, the 't' and 'd' sounds. Once back in dear old Blighty he went back to his old neutral Spanish, but in the last few weeks, he has been going back to that Cuban 'canta'o' and I can perfectly notice the Cuban accent coming out in droves now. Not that I mind, no. But this put me on a crossroads. As mentioned before I take my linguistics seriously and after my children started rolling their 'Rs' I felt over the moon. It's hard enough to teach children Spanish in an English-speaking country, let alone get them to do the multiple Spanish 'r' when the Anglo-Saxon counterpart is softer. Unless you hail from Glasgow (love the accent, by the way). So, with this in mind, I've been explaining to Son the meaning of blending (unión), that syntactical phenomenon whereby the ending of words, mainly vowels, are joined up with the beginning of the next ones along, mainly consonants. In Spanish, my latest attempt has been to get him to realise that in sentences like 'Hay un gato en el jardín' (there's a cat in the garden), the best way to go about the pronunciation bit, is to combine the hay un into one main sound as in AYuN, with the 'u' taking the back seat. Ditto with gato en, this becomes gatEn, whereby the 'o' is dropped in favour of the 'e'. But I was not ready for his dropping his 'Ss' so quickly. We all do it in Havana. We shorten phrases, by chopping whole chunks off words and sentences alike. That's why it's so hard to understand us, Cubans. And all the while we expect our interlocutor to finish certain sentences for us, as in when we say: Así que... (So...).
Will Son grow up to speak like a Cuban? I doubt it. Despite his occasional incursions into my so-called patois, his is an accent that betrays Englishness underneath. Same with Daughter. Unlike Son, her 'Ts' and 'Ds' are still explosive. Ours are more open and non-dental. Basically, you spit more on people whilst pronouncing the English 't' and 'd' sounds than when doing it in Spanish. But both Son and Daughter will definitely acquire the equivalent in English of a Transatlantic drawl, that cross between Middle American and Middle British.
But now, I must apologise and leave you because I have to get back to those dropped 'Ss'.
Copyright 2007
Posted by A Cuban In London at 20:10