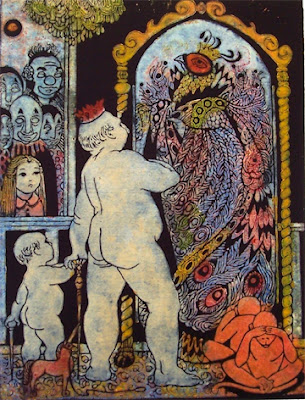 The emperor is angry. Very angry. Not because he's just realised his state of déshabillement whilst checking himself on the mirror, but because he's turned his back on it, still thinking he dons the clothes with which to show off to his opponents. The emperor is lecturing with his bare back to the mirror. And the lecture is on race. You see, the emperor does not like James Watson's views on race. The emperor has dictated that to allow this man to carry out his string of speaking engagements in Britain is tantamount to siding with the BNP. Further to his interview with The Sunday Times where Dr James Watson let it be known his views on black people (more specifically Africans) in relation to whites, the emperor has counter-attacked, got on his moral high horse and preached to the masses (especially those of us who can spot his nakedness) that indivuals like Dr Watson are not welcomed in dear old Blighty. And whilst doing this, he's trying to convince us of the beauty of his attire.

Who shall be the first one to yell: 'But he's got no clothes on!'? Where shall we start? And more importantly, who with? With Greg Dyke, ex BBC director-general, who claimed in an interview not so long ago that the corporation was hideously white? Or should we go back to a report by The Voice newspaper which found that the more foreign and/or African your name sounded whilst applying for a job the more likely you were to be rejected? Or maybe, we should ask ourselves why we assume black boys will go on to become sportsmen or entertainers (sometimes both, Ian Wright anyone?), but not scientists or CEOs? Dr Watson's comments, racist though they are, have their basis on a society that still measures people by the colour of their skin. The perception that black people, or rather non-whites, are inferior has gone unchallenged and accepted by the status quo for far too long. The Nobel Prize winner's apology, though intended to save his career, should not be acknowledged, not because of some kind of 'eye for an eye' vendetta, but because it is part of a bigger problem. That of the accepted view that black is low and white is high, African/Asian/American is inferior, European is superior. One needs only analyse Ron Atkinson's comments about French and Chelsea defender Marcel Desailly a few years ago and the stir they caused amongst the chattering classes to gauge how race is the constant elephant in the room, however everyone in the top political echelons refuses to acknowledge it. And when they do, they take to the middle of the road like ducks to the water. In a case of near 100% absolution, last year saw Ron Atkinson come back into the television world in a series highlighting the importance of learning a foreign language. How about a series highlighting the importance of learning how to use one's own language without putting down black players just because they've had a bad game?

The emperor cares so much about his clothes, that he wastes no time in lecturing the world about human rights violations (but torture and abuse by British troops in Iraq are brushed under the carpet), police excesses in other nations (however the Met is institutionally racist as the cases against Stephen Lawrence and De Menezes have shown) and corrupt regimes (just don't mention the BAE arms row, please).

If I was a 20-year-old black man instead of the almost 36-year-old I'll be in a few weeks, my main concern now would not be whether a Nobel Prize winner made a racist comment or not, but what is my government doing to show me that his remarks have no basis on reality? Not much, I'd hazard. Turn the telly on, or better, don't. Mostly white faces put there by white producers. Go to your local Tesco's. You'll see a few more black faces there... cleaning the floors, stacking shelves, usually with exotic-sounding African surnames. Go to the House of Commons. Or better, don't. You'll be depressed. And then you'll snap. And if/when you do, you'll become a figure, a statistic, just yet another way of showing that black people are... hey, hang on a sec, wasn't that what Dr Watson said from the very beginning? Wasn't that the reason why this whole brouhaha has taken pole position in the news after all?

And we are all part of it. We are the trusted men who went to see Guido and Luigi's creation (or non-creation) and reported to his majesty that the suit was ready. We were the townsfolk who were (are still) spellbound by his magnificent clothes and praised him for them. My question is, who will be the little boy breaking out of the crowd to yell:

But he has nothing on!