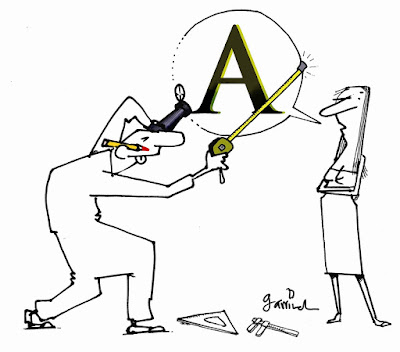 - Do not interrupt me when I'm talking, and DO NOT CORRECT ME!!!

Thus spoke Daughter recently, or rather shouted at me. And yes, my dear reader/poster/fellow blogger, I hold up my hand in shame. I suffer from severe linguistic obsession.

You see, it's difficult for me to let grammatical errors slide by and glide aimlessly into the void generated by half-said phrases, onomatopoeias and grunts which are actually words, only that they sound like grunts. I'm obsessed about my children learning good Spanish and on occasions I've been known even to correct Wife, who's a fluent speaker of the language I grew up with. I was aware that something was wrong when in a normal conversation I would be more attentive to her use of the subjunctive mood than the real content of the message she was trying to convey to me. And now, the problem has been compounded by my children's involvement in my condition. To their chagrin, I'd dare say. So, mea culpa. That's me.

How did it all start? And when? Well, the when I can point out. Uni. Yep, that's when all hell broke loose and I suddenly found myself immersed in this competitive environment from which I could not escape, nor did I want to. Because although it pains me to admit it, I loved linguistic competitiveness back in my Uni years. Over the years, and when I added German and French in that order to the cluster of languages I spoke fluently I developed a strong attraction towards both the minute details and the more noticeable aspects that made those two languages, plus Spanish and English so different from each other and yet so alike. I learnt that 'water' in English probably came from 'Wasser' in German, as the former is a Germanic language, too. Same with 'eau' (French) and 'agua' (Spanish), both romance languages. But when it came to in-laws, well, the situation got funny and both funny, ha-ha and weird. In German father-in-law is 'Schwiegervater', in French it's 'beau-père' and in Spanish 'suegro' or 'padre político'. So whilst in French they praise you and compliment you on your physical beauty, in Spanish they're thinking of snap elections.

The how is harder to explain. I guess that I was sucked into this linguistic vortex because of my natural inclination to question my surroundings, an attitude that as long as you restrict to languages in Cuba keeps you on the safe and sane side. And now I'm paying the price, because whereas Son is capable of translating entire books (posts passim) Daughter is beginning to go through the same motions he went through a few years ago. And we're clashing. Big time. I guess, I'll have to bide my time and be more patient because she's equally intelligent and capable as Son is. I am the one who have the problem. On the same note, living in a bilingual world in the UK makes me anxious. British culture is a very strong force with a strong identity (despite the alleged crisis) and language is one of the ways in which children with parents from different backgrounds, especially as in my case, with one of them born in Britain, can assert their individuality and build upon both sets of identities. The way we speak Spanish in Cuba is very peculiar and carries with it myriad cultural references that I'm positively sure will enrich my children's lives. And for that I'm prepared to change and be more patient.

Now, about that shouting...

Copyright 2007
Illustration courtesy of Garrincha
Posted by A Cuban In London at 17:35