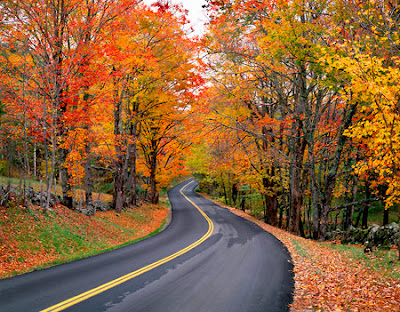 The car window is rolled down a little bit allowing some fresh air to caress my face. In the back my two children are reading, whilst my wife is sprawled on the front seat with her shoes off after teaching an exhausting soul-jazz class. Outside, the landscape is a combination of shades that remind me of ripe lemons, golden syrup, melting butter and thick honey. Leaves have not started to fall off trees yet, not at least in this part of London, but it can't be too long before we are assailed with a flood of the crunchy, dry and rhomboid-shaped foliage.


I like autumn. I like the smell of it. It has this particular scent of chilly mornings (chilly, not cold), pure air that fills up your nostrils and slows down your step. It's a season of colour. Yellow-tinted. Unlike spring, my other favourite season, the hues are not strident, but calmer, they don't stare at you, but doggedly let you soak them up. It's a transition period, it's preparation for a harsher stage. It's watered-down amber. And it's, above all, music.


I'm an autumn sign and my favourite music has that autumn touch to it. Starting today I will post what I consider to be essential listening during autumn season, or when feeling in an autumn mood (similar, but very different). I would like to know your opinion on it. Unlike most media lists in the UK of the 'The 100 Best...' or 'The 50 Most...' variety, this one will have not language barriers, and will cross over into many different cultures, including the Anglo-Saxon one. When possible, a link will be provided, usually to youtube, but occasionally to Amazon, myspace or any other website where I believe you can enhance your knowledge.


I'll kick off with an all-time favourite. Sinéad O' Connor's 'Thank You'.This track appears on her album Universal Mother and closes what, to me, is a paean to the human condition of being Irish and female. The record is as intense as it can be, probably as a consequence of Sinéad's decision of tearing up a photo of the Pope on US television two years before. Ever the confrontational performer, O' Connor opens with an excerpt of a speech by feminist writer Germaine Greer, followed by a feral and passionate musical onslaught called 'Fire on Babylon'. The anger and ire do not abate, but change and become more nuanced. The perfect coda is 'Thank You', with its haunting strings and strong bassline, this track is a flawless exultation to the power of love. And for that I thank you, too, Sinéad.


My second track today concerns my city, but it's not about my city. Long before Gerardo Alfonso came up with 'Sábanas Blancas', Havana's unofficial anthem, many songs had been written about the Cuban capital. Yet, to me it was the beautiful voice of Barbra Streisand, first, and Billy Joel, afterwards, singing to New York that gave me that sense of pride that comes from being born in such a marvellous place as my Scorpionic city.


The first time I heard 'New York State of Mind', it caught me off-guard. I had just turned 15 or 16 and I was at my friend's when he played the Barbra Streisand's cover version. Having being acquainted with her oeuvre before, I knew what to expect, but the sheer emotion coming out of the opening lines left me speechless. It also helped that I was able to understand the words, Barbra's voice being so crystal clear, though slightly nasal. A few years later, and already in Uni, I got the chance to listen to the original by Billy Joel, included in his album 'Turnstiles' and I realised that he man who gave us 'Piano Man' and 'It's Still Rock and Roll to Me' had just written a song to my city, Havana. Yes, because, 'New York State of Mind' goes beyond its borders. It's not just about the Hudson, but about the Almendares, filth and all, it's not just about the Greyhound leaving the city, but about route 67 in 80s Havana, going to Saúl Delgado college and me hanging from outside the door. 'New York State of Mind' is for the person who loves the city they've been born in, warts and all.


The third track to close this first round of autumn songs was one which I e-mailed out a few months ago and provoked an overwhelming positive response to the point where a student approached me at the London School of Dance when I did Jackie's workshop in the summer to tell me how much she had enjoyed that clip. And I can understand why. It's got everything in it, or as we say in good Cuban Spanish 'todo como en botica'. It's Chucho Valdéz with his father, the great Bebo Valdéz, reunited after many years in the US and improvising on a Cuban classic, 'La Comparsa'. There is a reason why to me this is a typical autumn song. It's got that reddish-hue, nostalgia-tinted mood (at least, to me, I grew up listening to my Dad playing Lecuona and Chopin first thing in the morning), in this clip it's about two generations coming together, one passing the baton to another, just like leaves fall off trees, so that new ones can be born on their branches. And lastly, this track envelops you like the scarf that you, yes, you, my dear reader, have just brought down from the attic and dusted off and wrapped around your neck to keep you warm.


And I must dash off now, since it's not only autumn that makes precipitation increase, my keyboard is starting to get drenched now.