Living in a Bilingual World (Prestissimo) 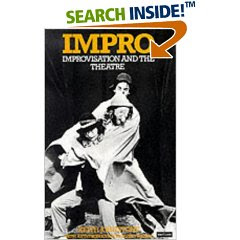 - La casa azul estaba en lo alto de una montaña...
- ... donde vivían tres osos que...
- ... se fueron a pasear...
- ... en eso entró una niña...
And then we mixed 'Goldilocks and the Three Bears' with 'Little Red Riding Hood' and 'The Gruffalo'. My kids had just had their first dose of Keith Johnstone and they were lapping up every single minute of it. The only rule for the game was that they were not allowed to think. As an intransitive verb think cancels out your id, that part of the psyche which is regarded as the reservoir of the instinctual drives and the source of psychic energy. Think is what helps you arrive at conclusions and weigh something mentally. What I wanted Son and Daughter to do was the complete opposite, I wanted them to let go, forget about grammar and just let go. And boy, did it work! They were both grinning enthusiastically as we wove the story around the traditional setting of the Three Bears making dinner and leaving it on the table for it to cool down whilst they took a walk around the forest. But I threw a few spanners in the works and their comfort zone disappeared. That's why Keith Johnstone worked wonders. With Johnstone there's no such thing as a comfort zone.
I first came across this Englishman back in Uni when I was training with the Improvisational Theatre troop. His was the manual that Danielle Fauteaux, our instructor, used and which I managed to keep to this day when the group disbanded. And I fell in love with his technique. Little did I know that it was in the field of linguistics where I'd be making better use of his theatrical approach.
Children learn languages better and faster than grown-ups because with them there are no inhibitions to consider. Both Son and Daughter make mistake galore whilst speaking Spanish but since they're not conscious about them, it matters not one iota what people think about them. When they talk to Spanish speakers, their efforts are rewarded with smiles, back-slaps and hugs. We, adults operate in a different mindset. Since we tend to quesiton the world around us, when learning a foreign language our heads begin to fill up with whys and wherefores, whereas the natural and logical process should be one of absorption and submission to the new language. The minute I started to apply Keith Johnstone's methods of 'Don't Think' and 'Don't Try to be Clever' to English my linguistic skills grew tenfold, I was able to read faster and for the first time I was able to think in English. Funny, isn't it? By not thinking I arrived at thinking in a foreign language. Son and Daughter are halfway there by means of seeing the learning of Spanish as a fun activity rather than a chore.
So, with this experience in mind I asked them if there'd be another time for another made-up story and with a Cheshire-cat grin on their faces they both answered in unison:
- ¡¡¡Sí!!!
Copyright 2007
Posted by A Cuban In London at 15:17