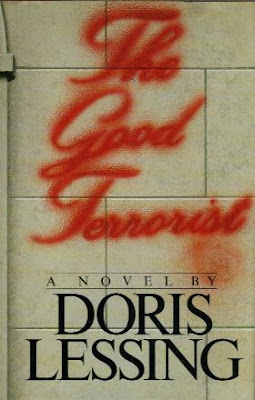 Is terrorism ever a viable option to achieve a fairer society? Can acts of terrorism leave the perpertrators emotionally unscathed? Can a terrorist separate, right down the middle, the emotions that spur them to fight against the status quo and the emotions that make them human? Can socialist ideas flourish, or even survive in a consumerist society? At what point does the individual become more important than the collective? At what point does it happen in reverse? How much are we willing to give up to achieve the ultimate goal of an equitable society? And what happens when we realise that it's too much? Is it too late, too?
Alice's call to the Samaritans in the final pages of The Good Terrorist, by Doris Lessing, is the catharsis of one of the most poignant fiction books I've ever read on the subject of leftwing European politics. Its ending reminded of the movie 'The Last King of Scotland' which came out earlier this year in the UK when Idi Amin, played by Forest Whitaker, tells Nicholas Garrigan, played by James McAvoy, 'So you thought this was a game, uh?'. Politics is not a game. It's never been. It never will be. And acts of sabotage do not just harm state property, but people, human, beings, individuals with flaws and virtues, vices and merits. And that is the main theme in 'The Good Terrorist'.
Through Alice's eyes and her middle-class bourgeois upbringing Lessing details a left-wing movement desillusioned with the incumbent Prime Minister, Margaret Thatcher, the state of the former Soviet Union and the lackadaisical attitude of many of their peers. The layers of their frustration, once peeled, reveal a strong desire to do. What? Anything. And it's that anything that proves fatal. Unfortunately for innocent bystanders, too.
Lessing manages to capture the spirit of a squat, its quibbles and quips, its flights of fancy and disappointments. Central to the novel is Alice as the character who holds it all together, and I mean that literally. She rescues the squat from the hands of the local council. She offers her shoulder to one of the occupiers when she needs it. She does the chores around the house and gets the money to get by (stealing it on one occasion even). She's the heroine, but more than that, she's the living proof that an individual's power should never be underestimated and thus, unwittingly she points at the failure of the state all the squatters are in awe of, namely, The Soviet Union.
Another interesting aspect of the novel is that there are not supporting roles, and I mean in the traditional sense that once one of the leading characters disappears, nothing is ever heard about them again. Whether by name or image, all original squatters appear all the way through the book until almost the very end.
Pivotal to the novel is the question of whether in a country like the UK, where there exists the rule of law, accountability, a judiciary and a free press (OK, don't smirk at the back, please), if there are enough conditions for a Cuban- or Soviet-style revolution to take place, or even to triumph. In my humble opinion the answer is a rotund no. Despite this, sometimes Alice's conversations with her mother, with whom she has a love/hate relationship, made me remember the slogans heard (and still seen and heard) in my childhood and youth in Cuba. Ultimately it's Alice's mother who serves as a powerful reminder that you can take the girl out of the 'class', but you can't the 'class' out of the girl. And by 'class', I mean social and economic status. When Alice sees the flat her Mum is living in after she vacates the house she shared with her father for so many years, she breaks into to tears. It's this kind of moment that Lessing is so good at depicting, the innermost feelings of a person for whom class is the source of all evil in the country she was born and brought up in.
The Good Terrorist is a good fiction read for anyone interested in the internal turmoils of the British Left. I gather that nothing much has changed since the mid 80s, although you, my dear fellow poster/reader/blogger would beg to differ.
Copyright 2007
Posted by A Cuban In London at 22:35