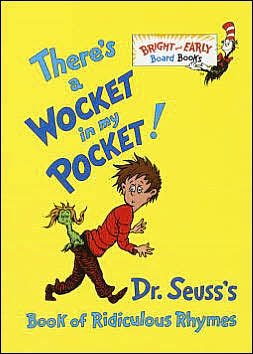 - ¿Alguna vez has tenido la sensación de que hay una zámpara en la lámpara? (Did you ever have the feeling there's a zamp in the lamp?)

- Los yepsaños/en los peldaños/nos traen mucha risa/y una buena compañía (The yeps/on the steps/are always fun/to have around)
That was me reading to Son when he was a couple of years old. And that was, too, my introduction to the zany world of Dr Seuss.
Getting books in Spanish in Britain is difficult which explains why I spent most of Son's early years translating his books from English to Spanish as I put him to bed in the evenings. Dr Seuss, in particular, posed a big challenge. Here was someone who came up with the unlikeliest, most ridiculous and preposterous names ever, and yet the funniest ones. I accepted the dare and Son was the winner, as usual.
First of all there was the small but rather conspicuous fact that there was no equivalent in English of the terms he came up with. Of course, they were all invented. Thus, I said to myself: 'Well, if that is the hurdle, I gues I'll have to find a way round it.' And find it I did. Wocket and Zamp proved a doddle, more difficult was nink that was meant to rhyme with sink. For some reason ninquero which rhymed with fregadero just didn't sound the same. But in the eternal battlefield that bilingualism can sometimes become pyrrhic victories like this, are the more savoured when the victor is your offspring. Besides, I don't think that it was totally similar to the fate that befell King Pyrrhus of Epirus. Unlike him the result favoured me more since the percentage of words that 'clicked' with Son and made him laugh far outnumbered the rest of the terms that went over his head.
I would recommed Dr Seuss' mundo loco, loco, loco (crazy, crazy, crazy world) to any parent immersed in the bilingual education of their progeny as I am, above all, for his fine sense of humour. He does not patronise children, which is why little ones love him so much.
I shall, however, spare you the details of my encounter with 'Green Eggs and Ham', another strong offering from the Dr Seuss' catalogue. Let us just say for the sake of argument that King Pyrrhus would be laughing his head off in his grave.
Copyright 2007
Posted by A Cuban In London at 15:55