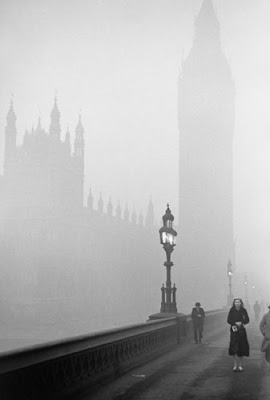 Last Sunday 23rd December as the heaviest fog I have ever seen in this country in my ten years living here descended upon London the first question that occurred to me was: What music would I be listening to if I was driving in this weather? Not that I would have been very keen to experiment going out in the car just to put a couple of tracks on. The fog started at around 2pm and a couple of hours later it was so dense that I could not even see outside my own window.

However, as I mentioned before, music did come into my mind right there and then and the first track that I would have chosen if I had been trapped in that big misty cloud last weekend would have been any song by Elis Regina's daughter, Maria Rita. It is a big burden on the young shoulders of the progeny of the woman many people consider to have been the best Brazilian singer ever. Yet, she performs this song with such aplomb and gusto that on a foggy day she would be my number one choice.

Fog also smacks of smokiness and dim lights. Recently I came across this singer for the first time whilst watching a programme on BBC Four. She reminds me of jazz bars and folk venues. Ciggies, booze and nodding heads. Her voice touches the surface of the Earth like a cloudy mist that wants to get closer to the ground and its density goes in crescendo as the song carries on. Enjoy.

Of course, that I would not like to go out on a foggy day unless absolutely necessary. This post deals only with what would happen if I was to find myself in the midst of one and with enough musical arsenal to defend myself from the lack of visibility. And wonderful Stevie is good for any day, but this track would definitely lift my spirits up and help me brave the weather.

Even if the Notting Hill Carnival, the biggest celebration of that nature in Europe, was taking place whilst I was driving in a fog as thick as the one I witnessed the other day, my perception of the world outside the car would still be one of total silence. And I would like to close this week's session with one of the better songs ever written by two of the more charismatic performers the folk and pop world has ever begotten.

And this is all for this week. Happy Fogless New Year!