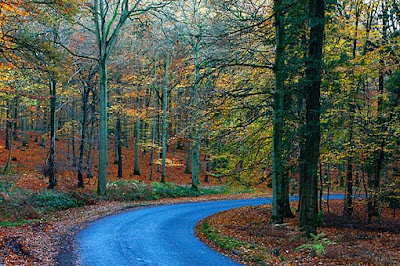 I was recently driving back home from Potters Bar, Hertfordshire, relishing a marvellous early winter sunset when I began to ponder on the joys of night-time driving. As the car headlights helped me cruise through the Ridgeway back to Enfield, nature's twilight hour brought a myriad creatures to the full beam of my front lights, thus, thrusting me into the whirpool of this lawless, carefree and unadultared animal world. Night-time driving music divests the listener of optical detours whilst ensnaring them in a type of Wild West grip.

Night-time driving music doesn't need/have to necessarily be slow, schmaltzy, ballad-type. Many a time I've caught myself humming quite loudly to a Fela Kuti's song or a track by Los Van Van. The only requirement(s) it must meet is leave you with that eerie and unearthly feeling of being part of the unknown, especially when driving in a motorway or in a countryside road.

The first clip is a testament to the wonderful world of networking. As social fora for like-minded folks, the internet and blogs, specifically, have become an essential part of the human existence and on this particular occasion I have fellow Cuban, journalist and blogger Ivan Darías Alfonso to thank for introducing me to the music of Souad Massi, an Algerian singer who has made inroads into French culture via her haunting and beautiful voice and, if the comments on youtube.com are anything to go by, the depth of her songs. Which I cannot understand as she sings in Arabic. I have just ordered her CD, 'Deb', after listening to a few tunes in the aforementioned website and I can't wait for it to arrive on my doorstep. Thanks Ivan and Merry Christmas to you and Elena.

This band should not have worked out. And the same goes for some night wildlife when you see it through the glass of your windshield. Some of it just doesn't make sense. Ditto with this group. The Doors had a guitarist rooted in flamenco music, a drummer with a jazz background and a keyboardist and pianist whose leanings were more towards Bach than The Beatles. And then they had Jim. And it worked. Beautifully. This song weighed on me in my teens and it still does. Pure musicianship.

The Cranberries took me by surprise when I first heard this album back in the mid 90s, just like night-time driving can throw up a few surprises hither and thither, sometimes not very nice ones. The opposite happens here. O' Riordan's voice is so delicate and yet so strong . Enjoy.

I've always been a Tori Amos' enthusiast. The passion with which she attacks the piano, her lyrics and the feeling of being on the edge of the unknown, or maybe the known unknown for I get a sense of comfort in being in her music's company. Just like when I'm driving at night collecting my son from Woodcraft Folk and we are both looking forward to the weekend. A known unknown which we both know will be worthwhile. And I want to set the mood for it right from Friday night.

Well, there ain't no sunshine at night, Bill. And how many times do you say 'I know' in that tune? It doesn't matter, it's the pure feeling wafting through the track, it's the guitar-playing skills, it's the heart-rending delivery, it's just pure, soulful, unadulturated music. Like night wildlife. Like night-time driving.

I was one of the lucky ones who managed to sneak into the Karl Marx Theatre in 1994 to see Manu Chao and Mano Negra in their only visit to Havana, as far as I know. And that concert has always stayed in my mind. The relentless energy, the camaraderie, the bond and the closeness of each and every musician on stage was mind-blowing. I must admit that I don't have all the songs I upload on this blog on CDs. I do have loads of CDs, but I also upload tracks which I would like to play in the car as I drive around the streets, roads and motorways of Britain and this is one of those songs.

And that's what night-time driving is about. The magnitude of the road, the smallness of the car, the infinite power of music.

This is all for this week. Have a Merry Christmas.