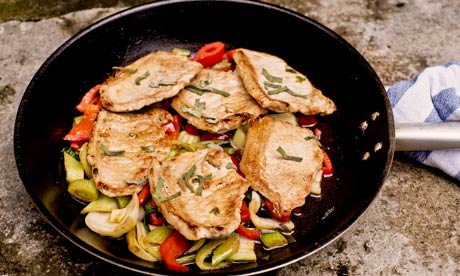 One of my favourite sections on this blog is making a comeback. Although I should say that it never really went away. But I wish sometimes I could post more articles about food. Especially about food in relation to music.

Summer is on its way out finally (honestly, my gente, I can't stand it! I know, I know. I was born in Cuba, tropical country with warm weather. But I'm a sucker for autumn... and spring). Anyhoo, as I was saying, or rather, writing, summer is taking its final bow and what better way to sign it off than with this tasty pork recipe? By the way, I didn't use pak choi when I made this. I don't even know what it looks like, but I think it's something like this.  Pork has a natural strong flavour, although my experience in the UK is that unless you go to a butcher's, you will be very disappointed by what they sell in supermarkets. The recipe is by Angela Harnett, who's slowly become one of my favourite chefs. I just hope she doesn't dethrone Nigel Slater. He's still my número uno.

Put 30ml of the olive oil into a large frying pan. Add the sliced peppers and saute for 10 minutes on a low heat.

Add the pak choi roots and saute for two minutes, throw in the green leaves and continue to cook on a low heat for a further two minutes. Add the sage and check seasoning. If the vegetables look as if they are drying out, add a little hot water.

Remove the vegetables, dry the pan with kitchen roll and add the remaining oil. Get your pan nice and hot, season the escalopes and fry on a medium heat for two minutes on each side.

Remove the pork, deglaze the pan with the lemon juice and add the vegetables for long enough to ensure they are hot through.

Rest the escalopes on top of the vegetables to serve.

As for the music I chose to go with this dish it mirrors the season. The transition from summer to autumn, which means that the melodies I selected move from an upbeat tone to a more subdued mood. When Angela writes about sage and peppers that makes think of seasoning. Just like Chila Lynn's Real Woman makes me think of cool, catchy pop. She's a Cuban-born singer who performs in both Spanish and English. I hope you enjoy this track from her debut album, Real Woman.

Ex-Cranberries, post-Cranberries, still-Cranberries? I've no idea, all I know that the first time I heard the lilting, strong Irish accent of Dolores O'Riordan, I was smitten. I still have a tape where a friend of mine recorded a couple of tracks by The Cranberries as fillers. This song, Black Widow, might well represent the first leaf that falls from a tree as soon as August gives way to September. The song is apparently about Dolores's mother-in-law's death. O'Riordan's voice reminds me of cooking on a low heat. Although normally high-pitched, she can bring her tone down to a husky whisper. Now, that's what I call singing.

My last musical offering tonight comes all the way from Brazil. I "discovered" Criolo back in the summer through a compilation CD that came with my copy of Songlines magazine. This track, Não Existe Amor em SP (There's no love in Sao Paulo) is about the lack of love and hope in that city. Criolo is actually a rapper but he can also put his soul hat on and belt out a heartfelt tune like this. I recommend that you check out his other clips on youtube. Brilliant performer, and the band ain't 'alf bad either, innit? Just like that simmering pork, I hope you enjoy the music. Ta.

Angela Hartnett is chef patron at Murano restaurant and consults at the Whitechapel Gallery and Dining Room, London. Twitter.com/angelahartnett. Photograph: Sarah Lee for the Guardian