On Mondays I'm Joe, the lorry driver, travelling from the UK to mainland Europe via Dover and writing a blog about my experiences on the road. On Tuesday I'm Robert, a bespectacled librarian who works at the British Library Museum and who loves misplacing books whilst checking people's reactions. I also have a cyber-space where I describe my activities. Then, on Wednesday I'm Leonard, a stroppy teenager who hates his name and calls himself Fido. Under this guise I like roaming the neighbourhood and scaring people with my zombie outfit. My online diary is full of funny entries, like the one about Mrs Waller and how she wet herself when I jumped on her from behind late one night when she was out walking her dog. The canine also made a little puddle itself. From Thursday to Saturday I'm Bruce Patel, the soft-hearted bouncer who works at an alternative Bollywood club. I even have a tilaka on my forehead. And, of course, I write a blog about what it's like to be a security guard at a nightclub. Burly, stocky and intimidating I may look, but, remember, I have a kind soul.

On Sundays I'm the Lesbian in Damascus.

Why should we be surprised that the Gay Girl who made the uprising in Syria feel much closer turned out to be an Edinburgh-based bloke originally from the States? After all we had already been warned, back in the early 90s that when it came to the world wide web "You can be anything you want to be/Just turn yourself into anything you think that you could ever be/Be free with your tempo be free, be free/Surrender your ego, be free, be free to yourself!" ("Innuendo" by Queen). Of course, the British band were not singing about the multiple personality disorder that the net encourages in some people, but you could say their words were prescient.

Oh, the internet, don't you just love it? Whilst hundreds, if not thousands of people were out on the streets in Damascus, risking their lives to change the system and gays, especially, feared for their well-being, not just for daring to protest against the status quo, but also for their sexual orientation, a man amused himself by... 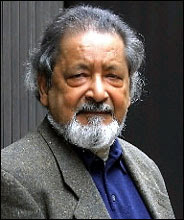 Enough! No, really, it's beyond the pale. The irony of it (if I can still muster a smile) is that this news came out a few days after VS Naipul let it be known that he found no woman writer his literary match. Sorry, did I just make you choke on your muesli? I beg your pardon. Please, sit down, because Laurel and Hardy are back, and this time they have teamed up with the Keystone Cops and the Marx Brothers. Oh, my sides!

According to V (I hope he doesn't mind me calling him that), "I read a piece of writing and within a paragraph or two I know whether it is by a woman or not. I think [it is] unequal to me." He went on to explain that this was because women, not being complete masters of a house, had a narrow view of the world. I think he might have got stuck in the 1860s, Victorian England. Time to drag him to my house where my wife would definitely give V a crash course on gender equality.

I admit that as a writer, I like Naipul. I read and intend to re-read In a Free State because of the sense of displacement it conveys and the loose narrative. Half a Life has a quasi-autobiographical feel to it. His novels don't follow a single structure; on the contrary, they're multilayered. In the same way that Alice Munro's writing is multilayered, or Zora Neale Hurston's. And they're female writers.

The problem with V is that he's chosen the wrong target. Writing has become so homogeneous that it's hard to tell male and female writers apart. The "lad culture" from the 90s gave way to the metrosexual movement from the early noughties. Same with women and the whole "ladette" malarkey. It was swiftly followed by the "Bridget Jones" brigade. Where and when the - literary - market calls the shots, writing is neither feminine nor masculine. As long as it sells a bloke in the Jeremy Clarkson mould could very well pen a novel that belongs in the chick-lit genre.

That's why I wasn't surprised to find out that the Gay Girl in Damascus blog was a hoax. A few times fellow cyber-diarists and readers have been surprised to learn that I'm actually a straight, black man from downtown Havana with an incurable reading habit (not that I'm looking to be "cured", either) and strong opinions. Blimey, I would have thought that my cynical and warped sense would have given the game away, exposing a blokeish streak. But no. Maybe it's to do with the way I write or the subjects I choose, but some of you have stencilled a skirt on me. So, VS Naipaul's theory doesn't apply. And why should it? Does the mention of midwives, children and marriage in books only apply to women? Hell, no. In Midnight's Children there's plenty of talk about marriage and children. Plus Rushdie really goes to town with emotions, one of the elements that is said to characterise women's writing.

What should have really happened is that someone should have given the Gay Girl in Damascus blog to V to read. And then sit on a corner quietly whilst the author of A House for Mr Biswas analysed and digested the information in front of him before pronouncing on the gender of the writer. How to interpret a passage like this one: "What a time to be in Syria! What a time to be an Arab! What a time to be alive! These are the thoughts flashing through my mind right now … I want to rush out in the street and celebrate (and will as soon as I finish writing this) …" For the life of me I cannot see evidence of vaginal or penile influence in the excerpt above. Can you, my dear peeps?

It's time to realise, and accept, too, that when it comes to writing online and adopting an identity to go with it, Margritte's famous caption "Ceci n'est pas une pipe" is given a modern makeover along the lines of "Ceci n'est pas un homme, mais n'est pas une femme nonplus". Enough to shock even Jean Baudrillard.

Labels: A Cuban In London, Boy George, Cubans in London, The Crying Game