Asked once from where he got his inspiration, the late Cuban filmmaker Humberto Solás answered: I just go out and live. Now, I might or might not be right about his exact words, but the message was clear: for him life acted as a catalyst which spurred him on to make movies. The mundane, the quotidian; that was what motivated Solás. Not least in his magnum opus, Lucía, a film about three women living in different moments of Cuba's history. That ordinariness is present in the Lucía of 1895, Viscontiesque influence, notwithstanding. It is again found in the second story, set against the backdrop of the Machado dictatorship and it's ubiquituous in the final instalment, which takes place in the '60s as the Revolution gathers pace. 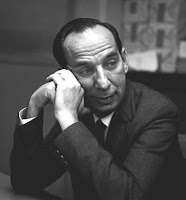 This approach to everyday events by artists and the use they make of them to transcend or otherwise, has been on my mind lately as I've just reached the mid point of Virgilio Piñera's Teatro Completo. Virgilio was Cuba's foremost writer and Teatro Completo is a collection of all his plays, some of which I'd already read and others which I hadn't. Piñera carved a very creative - though not always successful - career out of the mundane and ordinary. His innovative approach is there in Electra Garrigó, arguably the first play ever written in the style that would later become theatre of the absurd (Ionescu's The Bald Soprano premiered in 1950 in Paris, whereas Electra was written in 1941 and first saw the light in 1948 in Havana), it's also present in Aire Frío, Virgilio's semi-autobiographical family drama. Piñera's art was grounded in the local and recognisable. When Luz Marina complains endlessly about the heat in the first act of Aire Frío, her words acquire a meaning much deeper than at first glimpsed. Beyond the usual moan about the omnipresent hot weather in Cuba, there lies a message of frustration and disappointment; of being locked in a non-stopping carousel in an underveloped society.

For whom do writers writer? For whom do painters paint? For whom do film-makers make films? These questions have been circling my head lately like vultures following a pride of lions to see what they can scavenge.

It seems to me that some of the art - and I include literature in this definition, too - under whose infuence we have remained for centuries was created for a specific audience, and had even a somewhat ephemeral touch to it at the time. The Mona Lisa is the face of a local woman who is shown neither smiling nor grimacing. Yet, it is this ambiguity that has secured her position in the artistic canon. Bach's approach to music was at times minimalist and repetitive, a style that we could say was a precursor, in a way, to the work of contemporary composers such as Phillip Glass. However, his work has been acknowledged, and quite rightly so, as ground-breaking.

Was transcendence in these artists' minds when they set to create their masterpieces? I doubt it. Leonardo da Vinci was a protégé of Ludovico il Moro, Duke of Milan, by whom he was often commissioned to work on different projects. Any of his designs or models could have become as famous as the Mona Lisa. In Bach's case, he was not just a composer, but also an arranger and teacher. For these two artists their craft was a way of paying their bills. Hardly the romantic idea transcendence stands for, but reality nonetheless.

If I was to answer the three questions I asked before I would say that writers, painters and film-makers write, paint and make films for themselves first and foremost. Which is not to say that the end result is so labyrinthine that only they hold the key to the entrance and exit of the maze. No, it means that the art the artist creates must satisfy the artist above all. Of course, I've left out mortgage, bills and family on purpose. Please, don't burst my bubble yet. But my theory is the same: art is grounded on localism, the immediate and the quotidian. This is what makes The Beatles' A Day In the Life a segue to Joyce's tale about a day in the life of Leopold Bloom. Furthermore, art and its significance also depend on context.

Frida Kahlo used her body - almost literally - as her main inspiration. That her art exceeded all expectations can be pinned down not just to her creative prowess (and her famous partner, Diego Rivera), but also to her personal circumstances. Same with Picasso's Guernica. Without the historical backdrop of Italian and German warplanes laying waste to the eponymous town, his painting (commisioned by the Spanish Republican movement) would have joined the ranks of many others that have shown throughout the centuries the tragedy and suffering armed conflicts inflict. Another example is Korda's iconic photo of Che Guevara, which was actually shelved until El Guerrillero Heroico set off to export his radical ideas on how to make a revolution to Africa and Latin America. Then it became the must-have fashion item of wannabe revolutionaries the world over.

There are, however, cases of artists, including writers, who want to transcend at all costs and therefore make their works as inaccessible as possible, in the hope that only those belonging to a selected group can decipher their message. Sometimes even the act of decoding said work of art is tantamount to sacrilege; so much they want to rise above everything and everyone. Or on other occasions they go after the big themes, which is why there was so much controversy over Franzen's latest novel, Freedom and the way it seemed to want to depict and sum up quite ambitiously an entire era: the US before and after 9/11.

In my case, I prefer the artist who thinks local but whose art goes global, whether he/she intends it or not. And in that category I place Gil Scott-Heron, who sadly died a few days ago. Of all his trail-blazing songs, The Revoluton Will Not Be Televised, B-Movie, Lady Day and John Coltrane, the one to which I've always felt more affinity is Brother. It appears in his debut album, Small Talk at 125th and Lenox. When he sings 'We deal in too many externals, brother/Always afros, handshakes and dashikis/Never can a man build a working structure for black capitalism/Always does the man read Mao or Fanon', the message the melody conveys goes beyond the harangue to which Gil subjects his black brethren. The fact that a track featured in an album whose title refers to an address in New York makes me feel that way is testament to Scott-Heron's ability to transcend.

True art, in my opinion is grounded in the local and the quotidian. Virgilio, Kahlo and Scott-Heron knew it. That's why they went out and lived.