Living in a Bilingual World (The One About the Song)

And that's how I learnt how to roll my R's. Or at least the romantic in me would like to believe that the sound of my mother singing this famous Spanish lullaby whilst holding me close to her chest was what made my tongue vibrate at such an early age. 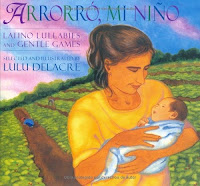 However, according to a book recently published by a child's development expert, there could be other reasons why my preciousness should not be seen as an oddity, but rather as the rule.

Parents who sing to their children, argues Sally Goddard Blythe, author of the book, 'The Genius of Natural Childhood', are equipping their progeny with a linguistic arsenal from the time they're born. For the writer, our globalised world should never be too modern that it can''t accommodate nursery rhymes and lullabies. It's not just the linguistic factor that is at stake, but also the emotional one. Children who are serenaded by their parents or carers develop very strong affectionate bonds with those surrounding them.

This is particularly important when dealing with foreign languages. Lullabies, or canciones de cuna, as we call them in Spanish, carry the melodies and inflections of a mother tongue. I still remember when Son was born and Wife decided to speak to him in Spanish. After all, we had decided to stay in the UK and he was going to learn English anyway. Yet, after a couple of months, Wife realised that she would have to switch back to her maternal lingo as she found it hard to express her emotions and feelings in a language that was still alien to her, fluency notwithstanding. Part of her argument centred also on the children's songs with which she had grown up and which she now wanted to share with Son. I couldn't agree more with her decision.

Traditional melodies help children discover, use and develop a new vocabulary. They will very often make up their own phrases, based on the songs they listen to. What I've also noticed, too, from singing to my own children when they were little (although Daughter still asks me to serenade her before going to bed sometimes) is that they're more responsive to a parent's voice than a tape or CD. It's a two-way system.

Maybe it's just a wacky idea, but if I was to take a leaf out of Sally's book, I would suggest creating a similar environment for learners of foreign languages to the one babies and toddlers experience. A soothing room for adolescents and adults where they're sung what would be the equivalent of lullabies. Imagine that. Not just a more linguistically proficient world, but one where people would be more in touch with their inner emotions. It's enough to make me post the rest of the canción de cuna with which I opened tonight's column: este niño lindo que nació de día/quiere que lo lleve a la dulcería/este niño lindo que nació de noche/quiere que lo lleve a pasear en coche/Duérmete mi niño/duérmete pedazo de mi corazón (this pretty child who was born at daytime/wants me to take him to the candy shop/this pretty child who was born at night/wants me to take him out for a ride in the car/sleep, my child sleep, piece of my heart)

Next Post: ‘Sunday Mornings: Coffee, Reflections and Music’, to be published on Sunday 29th May at 10am (GMT)
Posted by A Cuban In London at 23:59