The Trouble with Islam (Review) 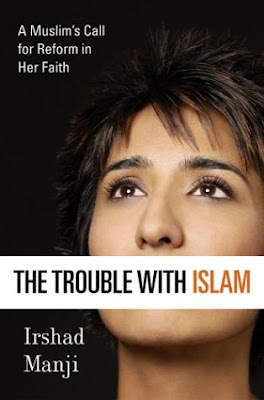 'I propose that, as a guiding value, we in the West agree on individuality. When we celebrate individuality, we let most people choose who they are, be they members of a religion, free spirits or both. For a lot of Europeans, individuality might ring too much of American individualism. It doesn't have to. Individualism - I'm out for myself - differs from individuality - I'm myself, and my society benefits from my uniqueness.'

Very few times I find articulate answers to a particular conundrum in a piece which, at first sight, might be unrelated to my initial dilemma. But this paragraph, included in Irshad Manji's highly controversial book 'The Trouble with Islam', had me wondering whether the Uganda-born Canadian writer was addressing the Cuban Parliament instead of her fellow Muslims.

'The Trouble with Islam' is an open and impassioned letter written by a woman who feels her religion is in peril. It's a wake-up call for Muslims everywhere to move away from what she calls - rightly or wrongly, it's up for you to decide - 'foundamentalism', that is, the accepted assumption that the only Islam to be practiced is that one coming from the Arabic states, specifically Saudi Arabia.

Irshad Manji doesn't mince her words. Her language is emphatic and provocative. In chapters such as 'Operation Ijtihad' this works wonders:

'Here's what I'd picked up so far. Muslims constantly exhibit a knack for degrading women and religious minorities. Could both of these troubles be tackled at the same time? (...) First, trade has always helped grease the wheels of the good relations among Muslims, Jews and Christians. Second, there's no prohibition in the Koran against women becoming businesspeople. My tentative conclusion: God-conscious, female-fueled capitalism might be the way to start Islam's liberal reformation.'

However in other passages I found her approach too Michael Moorish without the effectiveness that makes the American documentary-maker so feared and reviled by rightwing commentators. For instance, Irshad's visit to Israel in 2002 lasted only a couple of days but takes up more than sixty pages. Her comparison between her treatment at the hand of her Jewish hosts and that of their Muslim counterparts comes across more as a rant than as a balanced analysis, even if it's her experience that informs the two chapters.

Born in Uganda in 1968, Irshad Manji arrived in Vancouver, Canada in 1972 at the age of four with her family and settled in a middle-class suburb in Richmond. The first encouraging sign in 'The Trouble with Islam' that Irshad's view of the world and specifically of her past, is far from dim is her blunt criticism of how the black natives were treated by her fellow Muslims in her country of birth: 'like slaves'. Throughout her career, whether as host of Toronto-based Queer Television or Director of the Moral Courage Project at New York University, Manji incessantly has asked difficult questions on matters of race, religion and human rights. No wonder she has received several death threats. She has become in the words of The New York Times: 'Osama bin Laden’s worst nightmare'.

'The Trouble with Islam' can also be included amongst a group of books about religion that will make atheists such as me ponder the importance of faith for believers. Here's Manji on how distancing herself from tradition helped her reconnect with Islam:

'The more the mosque felt like the madressa, the less I attended. I started to decentralize my faith, cultivating a personal relationship with God rather than assuming it had to be mediated through a congregation. In that spirit, I prayed in solitude ("bowing alone", as the Harvard sociologist Robert Putnam, might say).'

Atheists will read that last sentence and probably cringe at the level of submission involved. We often wonder why one would need religion at all. Yet, if there's a lesson I've learnt in the last ten years or so is that many believers (and I'm referring to the three Abrahamic faiths here) reject the 'bearded men' wholeheartedly. Read the reaction from the Catholic community recently to the Pope's comment about the new equality bill being debated in the British parliament. Or the support from the Jewish community for the recent ruling by the supreme court on the Jewish Free School's admission policies. On both occasions, the moderate and reformist voices shouted down the traditionalist ones. And the key to that stand? That personal relationship with God that Irshad mentions in the passage quoted above.

'The Trouble with Islam' is a very relevant book for our times. Especially when Switzerland, that paradise of calmness, grazing cows and hand-painted landscapes, has voted against the building of minarets and Sarkozy, in France, is thinking of banning the niqab in public. Manji's proposal, that the Muslim Diaspora embark on what she calls 'Operation Ijtihad', is timely. More so, when one learns of the many technological and scientific advances achieved during Islam's golden age, between the 8th and 13th centuries. For Irshad this means taking the phrase 'Allāhu Akbar' more personally, maybe even changing it to 'I'm the greatest'.

Note: The clip below is part of Irshad Manji's film tour for 'Faith Without Fear', a documentary charting the Canadian author's journey through the Arabian peninsula and the Netherlands in an attempt to debate with fellow Muslims about Islam's place in our world today. It was my first brush with Irshad's oeuvre and although it did not result unfortunately in a public screening at my previous workplace (an arts centre) it did motivate me to buy her book and seek out this documentary. I recommend both.

Labels: A Cuban In London, Cubans in London, Irshad Manji, literature, review, The Trouble with Islam