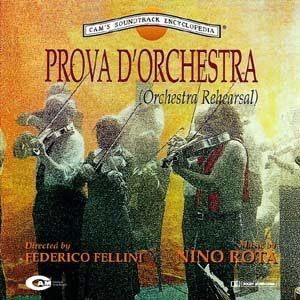 Maybe you are amongst the people who fall for Guido's introspection in '8½'. Or perhaps you belong to the group who finds playboy Marcello's meaningless affairs in 'La Dolce Vita' alluring. But when it comes to my favourite film by late Italian director, Federico Fellini, I know which one to choose: 'Prova d'Orchestra' (Orchestra Rehearsal). This lesser-known gem by Il Maestro is a joy to watch.

Made in 1978, 'Prova d'Orchestra' narrates the travails of a worldwide, famous conductor who arrives at a small oratorio to lead a rehearsal. From the outset he faces various challenges: the omnipresent union, the quarreling musicians and the impertinence with which he believes he is being treated by the members of the orchestra.

What makes the story so appealing to me is the quasi-documentary approach. The first thirty of forty minutes of the film involve a squabble between the union, a television crew - on site to film the renowned conductor - and the musicians. A union leader makes it clear to the performers that they will not get any extra money for talking to the reporters. Although his words act as a deterrent at first, little by little the musicians relax and the love for their instruments and the desire to talk and boast about them overcomes any apprehensions about payment. This is where the movie shines the brightest. Talking directly to the camera (that is to the viewer), each musician reveals what makes his or her instrument so special. Travelling the diapason of humour and melancholy, Fellini artfully crafts a tale where the love for music is palpably discernible. Here, is the first violinist bragging about his place at the heart of the orchestra. There, is the pianist looking bashful but shedding all vestige of coyness when she waxes lyrical about the black and whites. Banter ensues when the other musicians mention the bass tuba player.

Unlike the other two movies I mentioned before, in 'Prova d'Orchestra' Fellini avoids any type of aloofness and insouciance. Whereas in both '8½' and 'La Dolce Vita', Mastroianni is the epitome of cool and composure (though helped by Claudia Cardinale in the former and Anita Ekberg in the latter), in 'Orchestra Rehearsal' the roles are equally shared. Even Polish-born Balduin Bass, in the conductor's role, has to adhere to this democratic approach. Saying that, though, his time on screen is so captivating and magnetic that I couldn't take my eyes off him everytime he raised the baton and shouted out the famous - and dreaded amongst musicians - cri de guerre: Da Capo! His soliloquy at the end, where he mentions that nobody respects conductors anymore, could even be seen as a token of the even-handedness the film symbolises. At just 70 minutes long, this is one of those cinematic treats every one should watch, preferably on a cold winter's night with a cup of hot chocolate in hand.