I still remember my first act of altruism. I was in year 4. There might have been other moments of generosity before, but they were probably unintentional, and anyway, I cannot recall them. At that age, eight going nine, I was probably one of the fastest runners in my school and rare was the day when I didn't leave my opponents way behind as we raced around the local park during our PE class.

But one day a competition was organised against a nearby school, which happened to be also the place one of my closest mates attended. That's when my principle of unselfish concern for others (unbeknownst to me until then) made an unexpected appearance.

My friend used to be bullied at his school and many people, including me at that tender age, were of the opinion that his personality was partly to blame for this. I knew this because even amongst my close circle of pals, he was also abused every now and then. Apparently he was a 'softie'. Although he sometimes stood up for himself against the bullies, he ended up on the ground very often, overpowered by other children who were physically stronger than him.

On that day the stakes were high. If we beat his school, we would progress in the competition and consequentely we would be entered in a draw at borough level. Tell that to a year 4 student and watch him dream about the victory and glory success brings. What I didn't know at the time, until we almost positioned ourselves on the start line, was the fate awaiting my friend.

We had been pitted against each other. He was a good runner, but I knew I could beat him, having already done it many times when we played after school. Then, minutes before we were poised to begin, he whispered: 'They'll beat me'. What? I asked, what was that you said? 'They'll beat me if I lose'. And then he, surreptitiously, pointed at a group of three or four pupils standing nearby. Thoughts raced through my head. Was he having me on? After all, he knew I was a better runner. I looked at the bunch of thugs again and by the time one of the teachers shouted out: 'Go!', I had already made up my mind. We were supposed to run two laps around the park. I took the lead straight away and cheered on by my classmates I sped up. However, by the time I was three quarters into my second lap and on the way to victory, I pretended to fall. I tripped myself up and ended up on the ground, face down; unhurt but feigning injury. My friend, who was lagging way behind me, overtook me, not without first looking in my eyes and realising what I'd done. I limped towards the finish line and was warmly hugged by my mum and my teacher. The 'Never mind, that happens' and 'We're still proud of you' phrases rang in my ears like a scratchy record. At some point I turned around and saw my friend being lifted on the shoulders of those who, moments before, had been bent on inflicting damage on him.

Almost thirty years after I stuck out my neck for my mate, I am on the touchline on a warm summer day with myriad parents and carers. We are all looking at our offspring racing and skipping. Only this time there's no bullied kid to stand up for, but bullying parents to cope with. 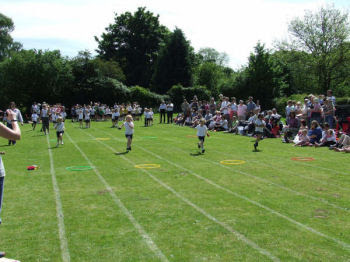 If someone had told me when I was a teenager that one day I would become a pushy parent when sports day came calling at my son and daughter's school I would have laughed their comments off. After all, both my wife and I have fostered a non-competitive approach to activities that demand more brawn than brain since our children were young. But I guess some things never change in life. My surprise was that I thought I was an isolated case. Well, far from it.

Let me just get back to that touchline for a second. And what's that I hear? 'C'mon, son, you can do better' (I swear that wasn't me), 'Get stuck in, luv', 'Oh, sweet'eart, you grazed your knee, never mind. Now get back up and run!', 'Wha' you rollin' on the ground for, son? Cross the ball, mate, cross the ball!' Ah, love it. And that was just the grandparents. Just joking. Well, just.

What is it about seeing our children, as in my case, engaging in physical activity that brings out the animal in our otherwise placid homo sapiens existence? And that makes us discard the sapiens from the equation, too, in the process?

I confess that throughout that whole sports session that day I tried to remain calm and cheerful, shouting out encouraging words not just to my two children but to the rest of the team of which they were part. But when my son and his classmates came up second in one of the races, it was hard to disguise my disappointment. And the funny, ironic, unfair aspect of it was...? That I was blaming another kid. Oh, yes, I was! Self-righteous, smug, little pushy father that I am (was, was, sorry, it happened only that day, I swear!). I zeroed in on this other young chap and began to watch him closely and as soon as the other games resumed I started to cheer on him rather than my son, to his parents' surprise - oh, yes, they were both there and that must have looked odd, to say the least.

That's why it's only now, as an adult, that I can understand how the experience of playing sports, competing in them and participating in an open school day where you have your next of kin watching you closely, can leave damaging scars for life sometimes. I've met people for whom the experience of playing for their school's football team was too awful to bear; the tackle came too late, they did not react quickly enough, the teacher's criticism was too harsh and the jibes from his or her teammates were cruel.

And yet, is this winning vs losing quagmire not a reflection of the life my children will have to face at some point? A basic lesson on the pros and cons of teamwork and individual effort? My pragmatic self would say that, yes, indeed that's reality, but, at the same time I hope someday they both learn the importance of tripping themselves up for the sake of somebody else.

Next Post: 'Yesterday' by the Jasmin Vardimon Company (Review), to be published on Tuesday 9th February at 11:59pm (GMT)