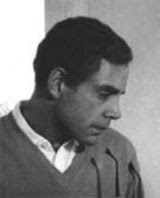 ‘And "Memories of Underdevelopment"
still keeps its appeal/
it’s strange that twenty years later
its light still seems so real.'
Thus sang the Cuban singer songwriter Carlos Varela in his paean to the trail-blazing movie ‘Memorias del Subdesarrollo (Memories of Underdevelopment) made in 1968 by the also Cuban film-maker Tomás Gutiérrez Alea (aka Titón). But what stood out the most in the film was the performance by the then 29-year-old actor Sergio Corrieri who has just died aged 68 in Havana.

Although in later years Corrieri was better known as the chairman of ICAP (The Cuban Institute for Friendship Between Peoples), it was theatre and more importantly cinema and television that brought him fame and the love of thousands, if not hundreds of thousands of Cubans of all ages.

Corrieri had his stage debut at the age of 16 and went on to develop a prolific career in theatre that landed him roles in plays by authors as diverse as Eugene O’Neill, Arthur Miller, Anton Chejov and Bertolt Brecht. In 1968 he founded the Escambray Theatre Group, with whom he toured the island, bringing the stage experience to the remotest places in Cuba. With the same company he also travelled abroad to both Angola and Nicaragua. In that same year, 1968, he played Sergio in the aforementioned ‘Memorias del Subdesarrollo’ (Memories of Underdevelopment), a film that explored a bourgeois man’s existential crisis when his family departs to the US afraid of the social changes made by the incumbent revolutionary government. Alone, Sergio ponders the pluses and minuses of the society he has decided to stay in. Years later, in the early 90s as the Cuban economy entered a period of recession first, and then crisis, the movie became an apocalyptic and prescient tale whose main message did not escape those of us who stayed behind.

But it was as double agent Fernando/David that Sergio Corrieri really caught the public’s imagination in the 70s. In this role for the TV series ‘En Silencio Ha Tenido Que Ser’ (It Has Had To Be In Secret), whose title came from a phrase used by Cuba’s National Hero Jose Marti in a letter to his friend Manuel Mercado, Corrieri excelled as a Cuban security agent who infiltrated the Miami counterrevolutionary world, thus destroying various plots to wreak havoc on the Caribbean island.

The only time I met Sergio Corrieri was in the summer of 1996. By then he had already been at the helm of ICAP for six years. At that time I was working as a free-lance interpreter and translator and had just been employed by a group of Canadians and Americans who wanted to find out about the economic crisis in Cuba. Corrieri had made it possible for the garden in the ICAP building to be used for outdoor concerts and on summer evenings, singer-songwriters and acoustic sets served as entertainment for visitors. Despite being a very busy man, Sergio agreed to meet us and I remember very clearly calling him Fernando throughout our conversation. When I finally realised my mistake and apologised to him, he just smiled and said: ‘Never mind, it happens all the time.'

Sergio Corrieri’s acting career spanned three decades and for this he was rightly acknowledged with the Félix Varela Order and the Alejo Carpentier Medal amongst other distinctions. But it was mainly the respect and affection shown by the Cuban people that mattered to him most.